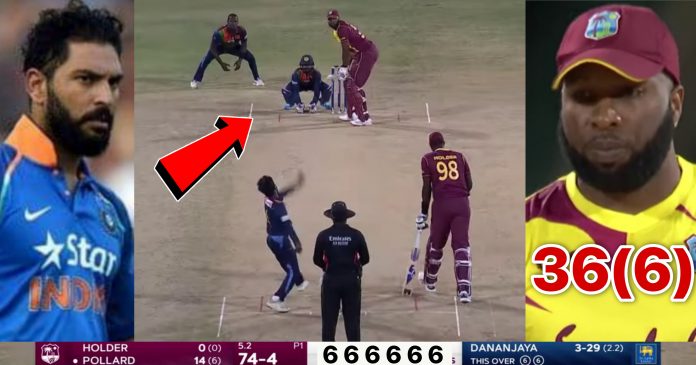 Kieron Pollard is most sought after T20 cricketer in the World. Pollard’s image as the most destructive batsman is at par with Gayle, arguably. Moreover, his T20 stats as a batsman is next only to Gayle. Coming in at 5,6 or 7, Pollard can change the momentum of the game in just the space of an over.

Fans of IPL remember many of his innings for Mumbai Indians, the team which he represents in IPL. Further, his quick fire cameos has helped MI win for nearly hopeless and impossible to win scenarios.

The only complain which cricket fans has had from Pollard was that he is not the same batsman in international cricket. Over the years, Pollard has done remarkably well in league cricket. But, somehow he has not been able to achieve the same height in international cricket. Thus, this was a short coming Pollard had to overcome in order to be regarded as one of the legends in T20 cricket like Chris Gayle and Sunil Narine.

All that complaints about Pollard came to a stand still in the First T20 game between Sri Lanka and West Indies. Additionally, this game made sure that for quite some time from now on, no one will have to say anything about Pollard’s exploits in international cricket.

Kieron Pollard just became the third batsman in international cricket and second in T20 cricket to hit six sixes in an over!. Herschelle Gibbs and Yuvraj Singh are the other two to have achieved that feat.

Pollard came to the crease after Akila Dananjaya, the off spinner has completed a hat trick. West Indies were chasing a modest 134 and had a thumping start to their innings. They reached 52 in less than 4 overs before Dananjaya struck. In a matter of three deliveries, the score became 52-3 from 52 to 0. The pressure was back on West Indies.

However, Pollard wasn’t going to get bogged down by that. His carnage on the bowler started in the sixth over with Windies score at 62. One after another, all the balls disappeared for six as 36 runs came off the over!

Ball 1- A length ball was slog swept over mid wicket for maximum.

2nd ball – Another full length delivery was swatted straight over the bowlers head for a six!

3rd ball – A delivery pitched out side off was thumped over mid on for 6.

Ball 4 – slower delivery on off stump was pumped over mid wicket for another six.

5th ball – A cutter delivered from back of the hand was smashed over long on for fifth 6 of the over.

Ball 6 – With nothing to lose, the bowler came to round the wicket. However, it could not make any difference as Pollard just flicked then ball off his pads to complete the set of sixes of every ball of the over!

His incredible hitting made sure Windies chased the total in just under 14 overs for the loss of 6 wickets as they went up by 1-0 in the series.

For his match winning innings, Pollard was adjudged the man of the match.

Watch that incredible over of 6 sixes, here-:

Watch : Rashid Khan plays a helicopter shot like Dhoni while playing Golf in...