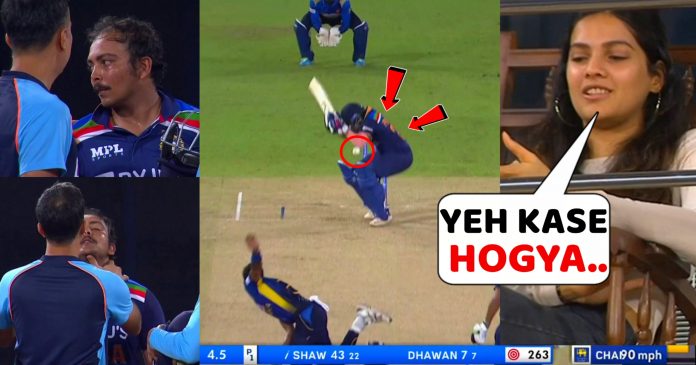 India beat Sri Lanka in a one sided contest in the first ODI between the two teams. Winning the toss, Sri Lanka batted first and made a reasonable score of 262-9. The target was not a small one but Indians made a mockery of the chase. They knocked off the runs in just 36.4 overs with 7 wickets in hand.

Captain Shikhar Dhawan played a good innings of an unbeaten 86 while Surya Kumar Yadav remained not out at 31 in a mere 20 balls. Playing his first ODI, Yadav smashed 5 fours in his innings and proved to be a catalyst in the result.

Ishan Kishan who was also on debut played a scintillating innings of 58 in 42 that included 8 fours and 2 sixes. The left hander played some terrific strokes in his first outing in ODI cricket. It was only Manish Pandey who could not do much. The Karnataka batsman scored 26 in 40 deliveries and looked a bit scratchy.

However the impetus to the innings was provided at the start by opener Prithvi Shaw. The talented player scored 43 in just 24 balls that contained 9 fours. His effortless stroke making was a treat to watch as he played shots around the wicket. It appeared that he was determined to put the bad form behind which resulted in him getting dropped from the team.

Preferred over another talented opener Devdutt Padikkal to open the innings with Dhawan, Shaw was in business straightaway. He started the innings with back to back boundaries in the first 3 balls of the first over. It was followed by some glorious shots that enthralled the Indian fans.

However amidst his rapid innings, there was a moment which looked a bit scary regarding Shaw. The incident happened in the fifth over of the innings when quick bowler Dushmantha Chameera was bowling to the Indian batsman.

After getting hit for 2 consecutive fours, Chameera responded in typical fast bowler style. He bowled a pacy short delivery which Shaw tried to duck. However while doing that, he took his eyes away from the line and hence the ball hit him flush on the helmet.

Such was the blow that the ball dribbled away to the fine leg for byes. Also, physio came running in and checked on Shaw who fortunately was fit to bat.

Watch: Unbelievable Bowling By Shakib Al Hasan On His Comeback vs Windies