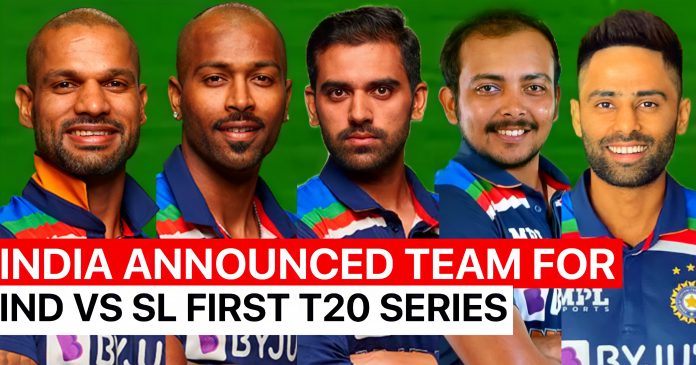 After a successful victory in ODI series, India vs Sri Lanka tour moves to T20 format. The first match will begin tomorrow from 8pm at R Premadasa in Colombo. The Indian team taking the field tomorrow could look like this :

1 ) Shikhar Dhawan –  He is the first player that will be on the team sheet for India. Not only is he the senior most player in the team, he will also lead the Indian side. Dhawan has played 65 T20s with a healthy average of 28 and a strike rate of 128. The southpaw has close to 1700 runs and 11 half centuries to his name.

2 ) Prithvi Shaw – He has shown glimpse of his immense talent when he smashed more than 800 runs in Vijay Hazare trophy earlier this year at an otherworldly average of 165. Also he looked in good touch in the ODI series. He is yet to play a T20 for India.

3 ) Surya Kumar Yadav – The 30 year old batsman from Mumbai made a brilliant debut for India in the T20 format. He smashed 89 runs in 2 innings against a quality English bowling attack that includes a fifty. Moreover, a stellar IPL season means that he is likely to get his chance in the T20 at the much coveted number 3 position. Its the same spot where the regular Indian captain Virat Kohli bats.

4 ) Sanju Samson/ Ishan Kishan – This is a dilemma the Indian team will face. Both are explosive wicket keeper batsmen as they have shown in IPL. While Samson has been earmarked as a potential India player since his U19 days in 2014, Kishan is a more recent addition to the plethora of Indian talent pool. Samson averages an ordinary 11 after 7 games, Kishan has played 2 games averaging 30. It will be interesting to see which of the wicket keeper gets a chance to play in the first game

5 ) Manish Pandey – The 31 year old batsman from Karnataka is not a new player for India. He made his debut in 2015 but unfortunately could not cement his place in the side. The right hander has played 39 games over a period of 6 years and has been getting in and out of the team. In the matches he has played, Pandey averages 44 with a good strike rate of 127. He also has a 3 half centuries to his name. This time Manish Pandey will look to seal his spot in the middle order at number 5.

7 ) Bhuvaneshwar Kumar – The right arm swing bowler is the most experienced for India in this team. With 45 wickets to his name in the format, Kumar will be the leader of the attack.

8 ) Krunal Pandya – The senior Pandya will look to add up as a spin bowling allrounder. He has played 18 games in T20 cricket with an average of 24 with a SR of 132. Also he has taken 14 wickets in the format.

9 ) Deepak Chahar – The 28 year old is very similar to Bhuvi Kumar in skills. He can swing the new ball and can bat with competence at number 8 / 9. Hence, Chahar is likely to be the partner for Bhuvi Kumar with new ball. Moreover he put up an all round performance in the second ODI which led India to victory.

10 ) Varun Chakrvarthy – A mystery spinner from Karnataka, he turned heads in the IPL auction when he was brought for a record 4 crore rupees by Kolkata Knight Riders. After 21 games in the IPL, Varun has taken 25 wickets averaging 24.4 and a economy of 7.35. Moreover he became one of the few Indian bowlers to have taken a fifer in the IPL. He could play ahead of Rahul Chahar as the second spinner of the Indian side.

11 ) Yuzvendra Chahal – A leg spinner, Chahal should be preferred over Kuldeep Yadav as the preferred leg spinner Till date, he has 62 wickets to his name in 48 matches and is highest Indian wicket taker in the format.