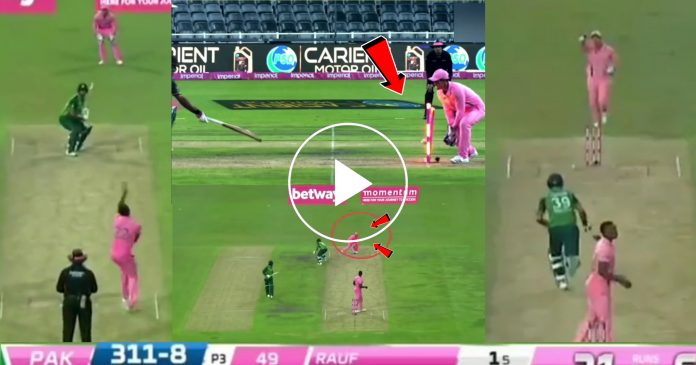 Pakistan are touring South Africa for a series of, 3 ODIs and 4 T20s. Both teams are going through the transition period, after an ordinary show in the 2019 World Cup. South Africa are reeling after the loss of their star players in, the form of retirements. Hashim Amla, AB De Villiers, Dale Steyn, Imran Tahir and Faf Du Plessis all have retired, from limited overs cricket.

Meanwhile Pakistan too, are quite inexperienced. With the retirement of Mohammad Amir and side lining, of Shoaib Malik and Mohammad Hafeez, they are relying only on rookie and young players. This match basically was a contest between two, flawed teams who are out there to prove themselves.

Pakistan had won the first game of the, series by 3 wickets on the last ball. It was a nail biter contest, as both teams fought till the end only for Pakistan to edge out the hosts.

In the second game of the series, South Africa took the revenge in some style. They won the game by 17 runs, to level the series 1-1. While it was mostly a team effort, by South Africa, it was just a one man show by Pakistan, in the form of Fakhar Zaman. The southpaw opener, made a record 193 runs and threatened to take Pakistan, to victory.

However, it was one cunning act by Proteas keeper Quinton De Kock, that led to his dismissal in the last over of the match. It was an act, that can be termed both as cunning and cheeky or cheating, depending upon the loyalty of fans. Also, spirit of cricket was also in question, by the display of De Kock.

It was the last over, of the match. On the first ball of it, Fakhar hit a shot to long off and called for two. He was a bit slow while, completing the second run. This is where, De Kock came up with trickery. He gestured with hand, that the ball is coming towards non strikers end, when it was actually coming towards, strikers end. As soon as Zaman looked back, the throw hit the stumps at strikers end and Zaman was run out!

The dismissal of Fakhar Zaman brought, in a lot of criticism and reactions on, social media. Some called it cheating, while some called it clever. The Pakistani fans had no love lost for De Kock, as they called him cheat and being, against spirits of the game. South African and others called it, as within laws of the game, and cunning.

Nevertheless, Zaman was run out on 193, as he missed out on a double ton. Pakistan in persuit of 342, could make only 324-9 and they lost, by 17 runs. Zaman was adjudged the man of the match, despite being ending up on the losing side.