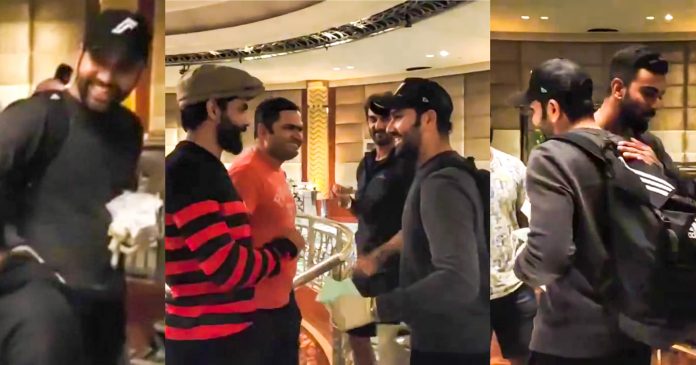 India are given a massive boost ahead of third test. Rohit Sharma has finally joined the test team and will strengthen India’s batting lineup for the rest of the series.

The talented batsman has missed the entire ODI and T20I series as he was rested. The board did not take risk with Rohit after sustaining hamstring injury in IPL. He subsequently trained and cleared fitness test on December 11.

Rohit then flew to Australia and has been in the mandatory two week quarantine. India has had a tough time with the bat during the series. They scored a mere 36 at Adelaide Oval and lost the test in an embarrassing way.

But the team bounced back and are in good mood after the triumph in Melbourne. Although, he is still subject to clearance for inclusion into final XI. Many cricket fans and analysts believe Rohit Sharma will open the innings in Sydney next week.

The entire team was very happy to see Rohit Sharma when he walked into the team meeting. He was warmly greeted by staff and team members alike.

Prithvi Shaw, Ravindra Jadeja and Wriddhiman Saha were the first to greet him. Soon oth players like Jasprit Bumrah, Kuldeep Yadav, T Natarajan and Washington Sundar came to welcome him into the team.

Captain Ajinkya Rahane was very happy to see Rohit Sharma back as well. They had a very warm chat with Rohit Sharma

Look who's joined the squad in Melbourne 😀

A warm welcome for @ImRo45 as he joins the team 🤗#TeamIndia #AUSvIND pic.twitter.com/uw49uPkDvR

“So how was your quarantine, my friend,” chief coach Ravi Shastri asked Rohit Sharma in the video by BCCI on their official twitter handle.

Rohit Sharma could replace Mayank Agarwal who has faced difficulties in negotiating new ball. He was dismissed for low scores in both the matches. The explosive opener should open the innings alongside Shubman Gill.

India, however, face a little dilemma in their pace bowling department. The team already lost Mohammad Shami in the first test. On the other hand, they suffered another blow when Umesh Yadav pulled out. The pacer is recovering quickly but it remains to be seen if he can make it to Sydney test.

The third Test is set to begin on January 7 at the Sydney Cricket Ground. A win in this match would ensure that the winning team will not lose the series.