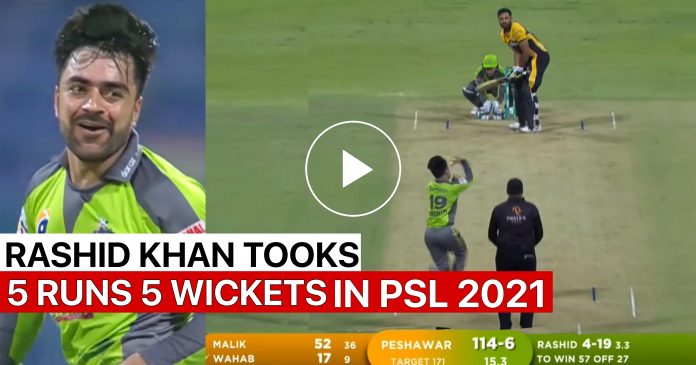 Leg spin King Rashid Khan produced yet another magical performance with the ball to light up the Pakistan Super League. Now, twice in three nights has Rashid taken his team to victory with imperious display of his skills. It was a match between Lahore Qalandars and Peshawar Zalmi in Abu Dhabi as the former lost the toss and was sent into bat. 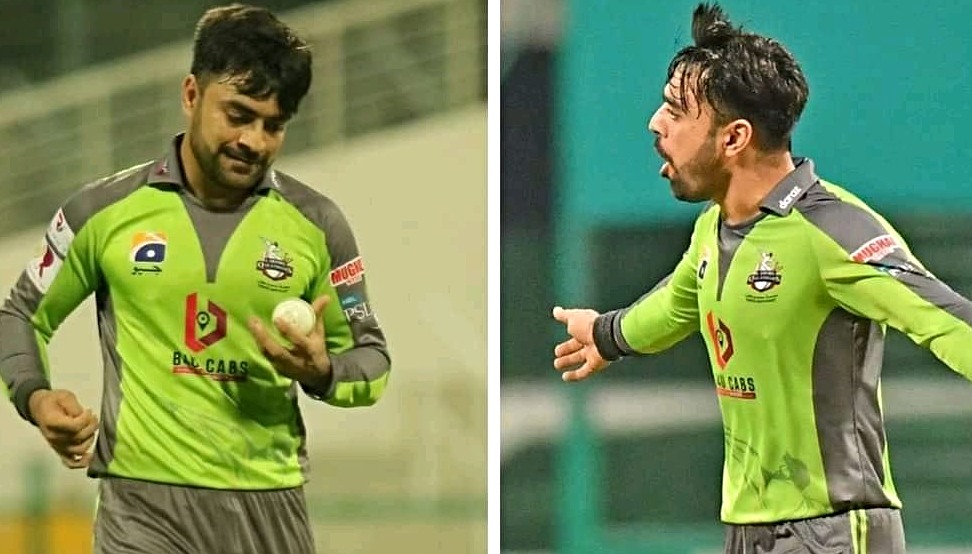 Lahore had a terrible start as they lost 4 top order wickets for 25 runs. The fifth wicket pair of Tim David and ben Dunk added 81 runs and resurrected the innings. In the end, Lahore managed 170 runs on the back of some lusty blows by their lower order.

In reply, Peshawar Zalmi too lost both their openers in quick succession at the score of 5 runs. Senior man Shoaib Malik and David Miller then tried to rectify the situation as Rashid Khan came to bowl the 7th over of the innings. However, it was a disappointing first over of the night by the spin maestro as he conceded 15 runs off it.

The leg spinner struggled with line and length as he bowled leg side deliveries which went for wides and boundaries. On the last ball, Malik smashed him for a six over long long off to complete 15 runs off the over. Fortunately for Rashid, that proved to be an aberration for the night. He made a stunning comeback in his next three overs as he took 5 wickets, giving just 5 runs!

His first wicket came in the very next over bowled by him. He bowled David Miller as the batsman dragged one onto his stumps. Two balls later, Rashid trapped Rovman Powell in front of the wicket for a duck. Just 2 runs came in this over.

The next over by him was an action replay as once again he took 2 wickets in the over. Moreover, this time he did not concede a run and bowled a maiden. Sherfane Rutherford became his third victim when he was bowled by the spinner with a perfectly pitched legbreak. Fabian Allen was caught plumb in front of the wicket on the last ball of the over as Rashid picked his fourth wicket of the night.

Khan’s fifth victim was Wahab Riaz when he was bowled on a quick delivery. Three runs came of the over as Rashid finished his spell with figures of 4-1-20-5. No wonder, he was adjudged the man of the match for second game in a row.