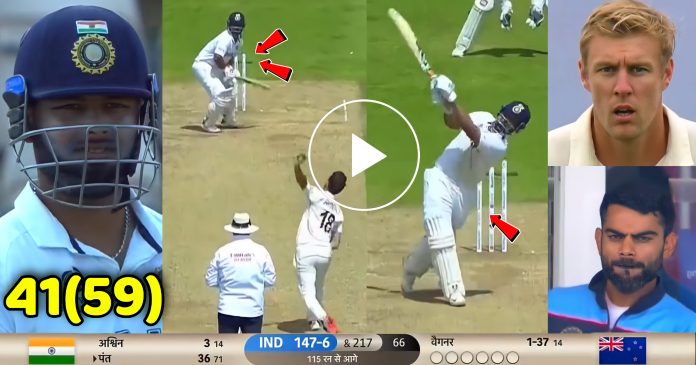 India have been bowled out for a paltry 170 runs vs New Zealand in the final of ICC World Test Championship at Southampton. The sixth and last day of the test started on time as clear skies awaited both the teams. However, for the Indian team, some brilliant bowling also awaited as they lost their 8 wickets for just 106 runs.

One after another, all the batsmen kept returning back to the pavilion in face of some terrific bowling by the Kiwi Pacers. The only one who could score runs and stood his ground against opposition was Rishabh Pant. The explosive left hander was the highest run scorer for India in the second innings. He made 41 runs in 88 balls and hit 4 boundaries.

The southpaw came to bat at number 6 when India was in trouble. They had just lost Cheteshwar Pujara and were leading by a mere 40 runs. Hence, Indian team needed both runs and solidity to put the pressure back on New Zealand.

His first boundary came against Tim Southee. However, it was more a fortuitous boundary rather than a proper shot. He tried to smash a delivery through off side but it took the edge and went just over gully for a four.

Pant’s second four came against the same bowler but this was a proper flick. A fuller delivery was hit through leg side with great use of the wrist. His next 2 boundaries were again more of a result of good fortune.

The third boundary by Pant came when he hit a drive that went just over mid off. His fourth four was again a result of an edge that ran through gully region. However, the thing stood out for Pant was his patience and curbing of aggressive intent. However, the first time he tried to be attacking, he lost his wicket.

Trent Boult was bowling when Pant decided to come down the track and smash him. But, he mistimed the shot as it went high up in the air. Henry Nicholls the fielder ran in from point and took the catch by running towards deep point by diving forward. The wicket pegged India back in the match and New Zealand soon closed the innings out