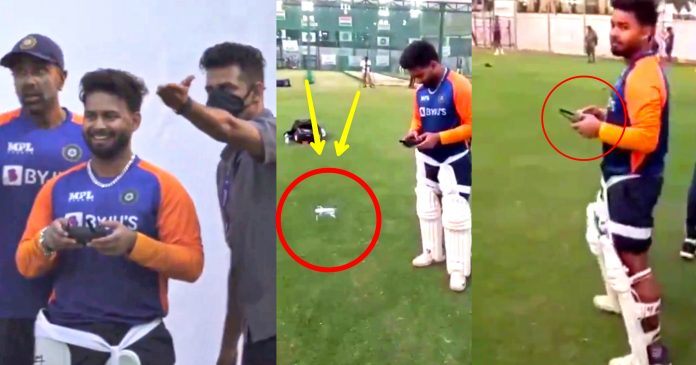 The swash buckling Indian wicket keeper batsman is in some serious form. Be it the Australia series down under or the ongoing test series vs England, he has played some decisive innings.

Naturally, he is talk of the town. Whatever he does on and off the cricket field becomes a headline. Meanwhile, Pant too comes up with such theatrics for the camera. He is after all, never shy of camera.

While training for the third test which will happen in Ahmedabad in newly built stadium, Pant came up with something similiar. He took to Instagram to let his fans watch his new gadget. The gadget has been named by him as ‘Spidey’.

With his new friend ‘Spidey’, Pant was seen having fun with his team mates all around him. They were enjoying Pant’s pyrotechnics with his camera.

Currently the most exciting young player along side Shubhman Gill, Pant is a crowd favorite. His ability to hit sixes at will while also entertain everyone with his chirping behind the wickets is a natural crowd puller.

The Board for cricket control in India, BCCI tweeted a video of Pant where he can be seen flying his drone in the training session prior the third test.

Here is the link to the video

Going into the third test match which will be a day night contest, both teams are level at 1-1. England won the first match while India won the second.

The Day-Night match will start on 24 February from 2:30 IST. The Motera stadium in Ahmedabad, Gujarat will host this match.