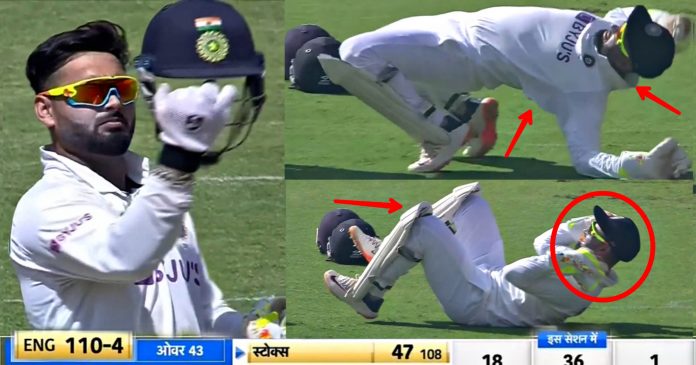 Rishabh Pant is a complete package. He is a swash buckler batsman. He is a good keeper. His one liners are second to none. His taunts to opposition batsmen leaves them embarrassed.

Additionally, his acrobatics and pyrotechnics while on the field makes him an instant crowd favorite. No wonder, the camera men has always have their eyes on him.

Another of Rishabh Pant’s camera attracting moment was seen in just the seventh over of English innings.

Ishant was bowling to Jonny Bairstow. As he bowled the third ball of the over, the batsman attempted to drive the delivery. However, he missed as the ball went to the wicketkeeper on a bounce. Pant then jumped to collect the ball and fell after collecting the ball as he got disbalanced.

Everyone expected Pant to casually stand up like most of the players do. However, Pant is Pant. Nothing about him is conventional.

Pant, instead of getting up easily, did a back flip where he just pushed his hands into the ground and threw himself in the air while landing on his feet!.

It was a treat to watch for his fans and spectators, where his small act of gymnastics lit the atmosphere up. Even Kohli standing next to him in the slips just gave a reaction of amusement and surprise when he saw Pant doing that. It was something on the likes of  “Waah Waah, kya baat kya baat”! Both had a good laugh over that act from the keeper.

Watch this mini acrobatics from Pant in this video -: