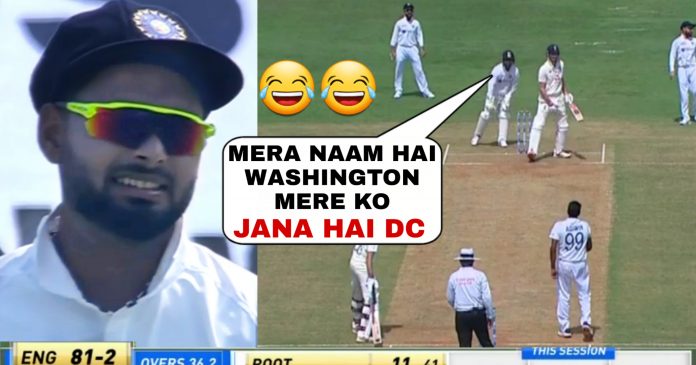 Indian cricketer Rishabh Pant was in high spirits during the first day’s play at Chennai. The southpaw kept joking and making comments, suggestions throughout the day to keep his teammates on lighter note.

This is not the first time as Pant was cool behind the stumps and kept chatting with fellow teammates even in Australia. Pant was animated and kept even the fans entertaining with his comments.

India were able to take two wickets in the first session. However, both Sibley and Joe Root managed to uplift England’s crisis. The duo got the visitors on track and dominated Indian bowlers as the day progressed.

In the third session, after many overs without wicket, the hosts were looking little dejected. But Pant managed to cheer up his teammates and bowlers Washington Sundar with a witty joke.

“Mera naam hai Washington, mereko jana hai DC (My name is Washington and I want to go to DC),” he said. This was caught on stump mics and has been viral on social media ever since.

The day was completely dominated by Joe Root and Sibley. The pair added up 200 run partnership for the third wicket and put visitors on a stronghold. However, Jasprit Bumrah provided some respite when he dismissed Sibley on the final over of the test match.

Both Washington Sundar and Shahbaz Nadeem looked little flat while bowling in the later parts of the day. They leaked runs as Root, Sibley attacked them sensing an opportunity to score quick runs in the final session.

India, meanwhile, have to find a way to stage a comeback into this test match. After losing an important toss, the team were on a backfoot. But if they can quickly dismiss remaining English batters then there is a chance.

The team has loads of character which has been evident in the last 18 months. The visitors will try to amass a big total as they had some bitter memories in their last tour. Kohli and Co. needs to work their way and keep positive minds going into tomorrow’s play.

Root holds the key for England’s batting yet again. He will look to cash in his form and potentially score a double hundred and put England in a strong position.