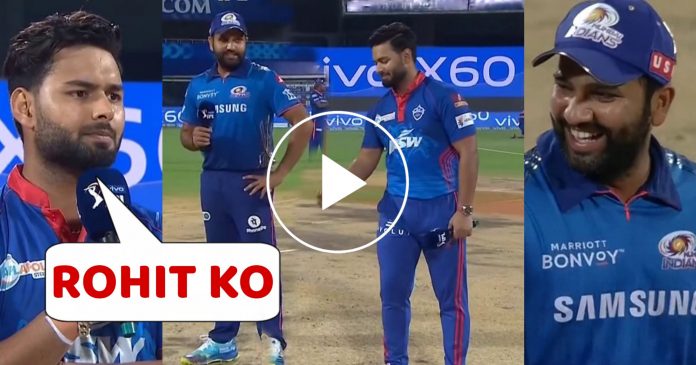 Delhi capitals are up against Mumbai Indians in in Indian Premier League today. The match is being played at Chepauk Stadium, Chennai. Both the teams have won two games out of three. However Mumbai Indians has been the bogey team of Delhi Capital for some time now.

Also Rishabh Pant said in muttered something which came out something like “aj Jeet kar dikhana”.

Basically he was challenging Rohit Sharma to win the game against Delhi Capitals. Today, one interesting fact regarding the match is that Mumbai Indians are playing just three Overseas players. In this match they are playing Kieron Pollard, Trent Boult and Quinton De Kock.

Adam Milne, the pace bowler from New Zealand is out. Meanwhile, Delhi Capitals have made two changes to their team, from the previous game.

Shimron Hetmyer and Amit Mishra are playing while Chris Woakes and Lukman Meriwala misses out. One of the reasons for the teams playing with more spinners as compared to other matches, is that the match is being played in Chennai and, the pitch is supposed to be dry.

3 overseas players only for MI

Rohit Sharma said after winning the toss that he expects the pitch to be dry. The batting will get difficult as the game goes on. So, he would like to win the toss and elect to bat first. Then, put runs on the board and then defend it with their supremely talented bowlers.

Mumbai  has been great in defending the targets considering the fact that they have defended low targets against Sunrisers Hyderabad and Kolkata Knight Riders. An interesting aspect about this game will be to watch Hardik Pandya is fit enough to bowl as the Mumbai Indians management had said that they are managing his workload.

Watch: Brilliant Bowling skills of Arjun Tendulkar who is sold for 20lakhs in IPL...