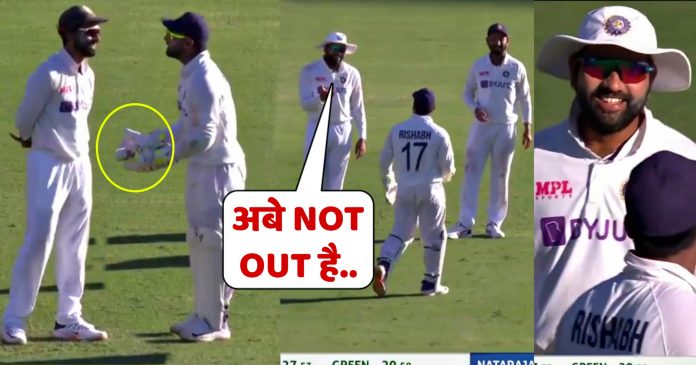 Indian wicketkeeper Rishabh Pant had been in high spirits throughout the day as he kept the team in good mood. But he went a little overexcited during the 84th over in the bowling of Natarajan.

The talented cricketer was excited because he thought there was a slight edge on the ball. However, captain Ajinkya Rahane was not as excited. Pant did his best to convince Rahane but no one in the slip’s cordon were interested.

At one point, Pant was literally pleading to Rahane to go for a review. But the Indian captain laughed sheepishly as he denied Pant. Once Pant was returning back to his position, Rohit Sharma was hilariously laughing at Pant with Pujara.

On the other hand, Shubman Gill was also having a smile in this funny situation. Replays suggested that there was no edge on the ball. In fact there was a clear gap between bat and ball.

But the ball from Natarajan swing waywardly once it went past stumps. Since it was a brand new ball, Pant got more excited. Nevertheless, he got his teammates a laugh after a tough day at the office on Day 1.

Pant was also very loud and cheerful as he kept the team in high spirits. India found it tough on the first day but kept going despite having an inexperienced bowling lineup.

Rishabh Pant was heaps keen on this one but he was getting donuts from the cordon! 😂 #AUSvIND pic.twitter.com/p4kHh536IZ

Indian bowling unit was on bare bones as they used endured yet another injury. The team was forced to rest Bumrah and Ashwin as they were not fit to participate in the test match.

But the team took a tough pill, when bowler Navdeep Saini was forced to walk off the field. He felt his adductor/groin region and pull out of the bowling. Although, he came back to field for sometime, he did not bowl another delivery for the reminder of the day.

India will look to pull back the hosts after their solid score at the stumps on day 1. The visitors could be relatively happy with their efforts but need to stem the run flow. Natarajan and Siraj were the pick of the bowlers and should continue their form in order to contain Australia for a score below 400.

Watch Chris Gayle smashes 5 fours in one over