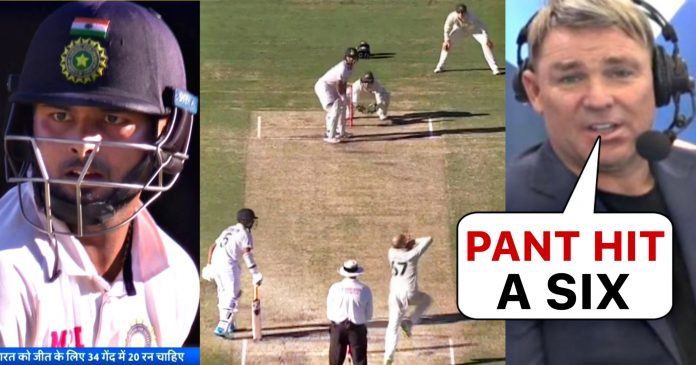 Indian cricketer Rishabh Pant played the best innings of his life at Brisbane. When India were looking at a probable draw, he played a crucial knock to chase a record total at Gabba.

What followed was history as India managed to breach Gabba fortress. During the course of the innings, Pant took calculative risks which put Australian bowlers on back foot. Despite losing key wickets, Pant kept on going for the win.

Nathan Lyon bowled a brilliant ball outside off stump that hit a crack. The ball then took wicked turn and went to the first step off the pitch. However, this did not stop Pant as he was keen to get on top of Nathan Lyon.

Shane Warne on air has revealed that Pant could just go for a maximum after that wicked ball from Lyon. He told the viewers to not be surprised if Pant does something out of the box. And his words came true just a few seconds later.

Pant came down the track and deposited the ball over long on boundary. Shane Warne was full of praise for the youngster for having the courage to counter Lyon. Pant went onto score an unbeaten 89 and saw India through to a historic win.

There has been lot of doubts over the future of Rishabh Pant. After a mediocre IPL 2020, people expected him to suffer a dip in Indian team if called upon. But Pant had other plans as he played some of the best cricket we saw him play ever.

The talented youngster kept his composure and his bat talked instead. He played a brilliant 97 at Sydney which helped India draw after a terrific fightback. However, he went one step ahead and completely outplayed Australian bowlers at Gabba.

Pant finished as India’s highest run getter despite playing only 3 out of 4 tests. He is expected to be the go to wicket keeper for the upcoming England series as well. At the rate at which he is developing, he might soon be a specialist batsman for India.

But his wicket keeping skills still need a little refurbishing. All in all, Indian team has a gem in Pant and it will be interesting to see how India will use him in this jam packed 2021 schedule.