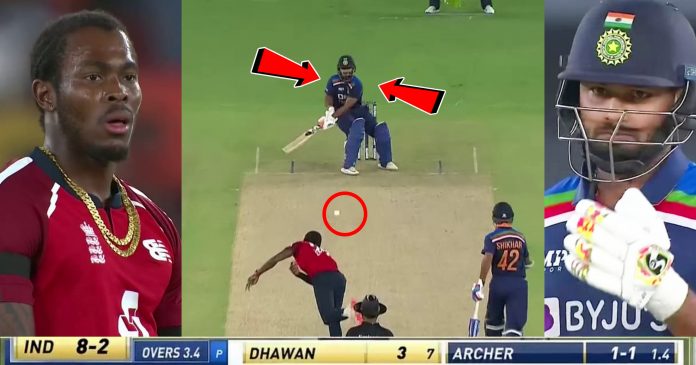 India and England are facing off each other in the first T20 at Ahmedabad. After the test series ended, the two teams will now play each other in a series involving 5 T20 games.

The first T20 is underway and England have won the toss. The English skipper decided to field first. This decision of him proved to be a fruitful one as India lost KL Rahul in the second over itself. Jofra Archer cleaned him up with a quick and pacy delivery.

India off to a disastrous start

Another gigantic blow came up in the next over when skipper Virat Kohli was out caught at mid off. The spinner Adil Rashid foxed him totally, as his shot got mistimed, offering a simple catch to the fielder.

At the fall of second wicket, came the crowd favorite and the star of the test series Rishabh Pant. He played carefully the first few deliveries before showing his incredible abilities again.

Pant to the fore again

Archer was bowling beautifully until Pant decided to show his skills as well. The first for balls of Archer’s over was safely played. Then, pant did something which left everyone in awe in the stadium.

Just like the previous four balls, it was short of a length and at quick pace. this time however, pant was more than ready as he was expecting it. He turned the face of the bat, twisted his body and just used the pace of the ball to send it over the slips for a 6! Yes, an express pacer bowling at 145km was reverse scooped by Pant for a six.

Reverse Scoop for a 6!

It was such a shot that it left Archer in disbelief and he could not quite comprehend the next few moments what had hit him.

The shot though was very similiar to the one Pant had hit to Anderson in the final test on course to his 100. Just like Anderson, Archer is also a pace spearhead of English and he too got the taste of Pant’s pyrotechnics.

The shot again proved that why Pant is rated so highly in international cricket and is billed as the next big thing in cricket. Its the X factor related to Pant which makes him so dangerous. No matter who the bowler is and what the conditions are, Pant can just destroy the line and length of the bowler with his shots. In just a matter of few overs, he can change the course of the game.

Earlier, India rested Rohit Sharma from the first T20 owing to the hectic schedule Rohit had come in from. Also, Bhuvaneshvar Kumar is playing for India after a gap of more than 15 months. Another star of the test series, Axar Patel is also making a comeback in to the Indian limited overs jersey after a long time.