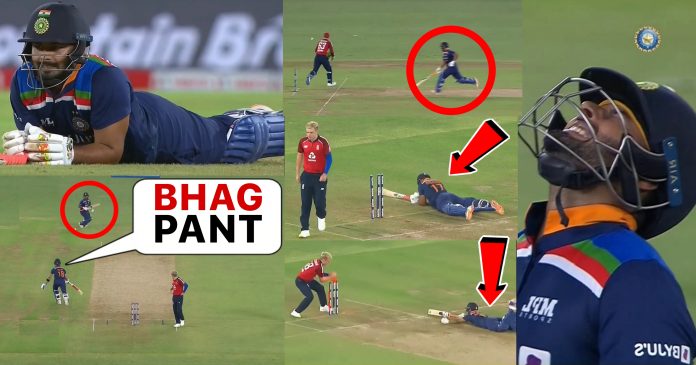 The third T20 game between India and England is underway. England won the toss and decided to field first. The decision to field proved to be right as India lost wickets upfront in a heap.

KL Rahul’s horrible form continued as he was dismissed for zero again. This was his second consecutive duck. His score as of now reads 1,0,0 in the three matches played.

The other opener Rohit Sharma also played after being rested from the first two T20’s. However, he could not time the ball properly. The batsman kept on struggling till he was out after scoring less than run a ball 15.

Star of the previous match Ishan Kishan too could not do much this time around. He was dismissed for 4 runs when he was out trying to pull a short delivery.

After that, Virat Kohli, the Indian captain and the wicket keeper batsman Rishabh Pant tried to stabilize the innings.

Both played some good strokes in their partnership. They were moving towards that dangerous territory where both of them had got set and then cash in later. But, that is when tragedy happened.

Sam Curran came to bowl the 11th over of the Indian innings. Pant was at the crease. It was a slower short delivery. The bowler had rolled his fingers over it. Rishabh pant played a pull shot and ran for a double. The duo easily completed the double but then Kohli decided to take the third run. It proved to be a suicidal attempt.

Pant had gone too far across the crease while going for the second run. This proved to be the downfall for batsman. At no point of time it appeared that he would complete the third run. The throw at the non strikers end was good from the fielder and the bowler had all the time in the world to take the bails off.

Despite a full length dive, Pant could not reach the crease as he was run out. After he was dismissed, Pant was almost in tears when the camera panned at him. Also, Kohli looked disappointed at himself for it was his decision to call for the third run.

India lost the opportunity of forming a solid partnership and the run rate again took a beating as the new batsmen had to start all over again.

Watch the video of Rishabh Pant’s run out, here in this:

Watch Maxwell’s muscular hit for 6! Breaks a chair in the stands!!!