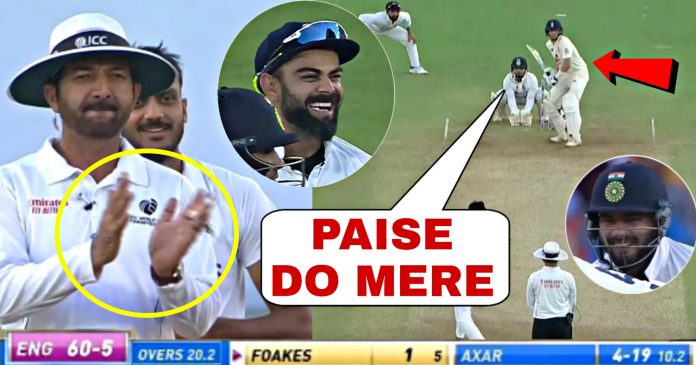 Indian cricketer Rishabh Pant has come a long way in the last three months. After being constantly compared to MS Dhoni in previous years, Indian fans have finally embraced Pant with open arms.

The southpaw was in sensational form with the bat for India in recent months. On the other hand, he has been world class with the glove work on a tough turning tracks in Chennai and Ahmedabad. These factors are slowly making him a fan favorite.

Naturally, he is talk of the town. Whatever he does on and off the cricket field becomes a headline. Meanwhile, Pant too comes up with such theatrics for the camera. He is after all, never shy of camera.

One more factor behind immense popularity of Pant is his comical and hilarious one liners. He has that uncanny ability to speak something in a lighter tone which tickles the funny bones of everyone.

In the recently concluded third test between India and England, something similiar happened in which the hilarious content was of next level.

England were batting in the second innings at the score of 60-5. Ben Foakes and Olli Pope were at the crease. At that point of time, the bails somehow got into disturbed. Anil Chaudhary, the umpire watched this and asked Pant to keep the bails accurately. Pant did as asked by the umpire, while saying to the umpire – Mere Paise do!( Give my money)

You can watch the video of this moment, here!

The keeper said this because keeping stumps and bails intact is part of umpire’s job. he gets paid for it. So in a highly tongue in cheek comment, Pant said that since he is doing the job of umpire, he should share some of his income with him! Hearing this, most of the close in fielders started giggling.

No wonder, Rishabh Pant is so loved by his team mates and fans alike.

Watch Glenn Maxwell hits a gigantic six. The ball goes out of stadium.