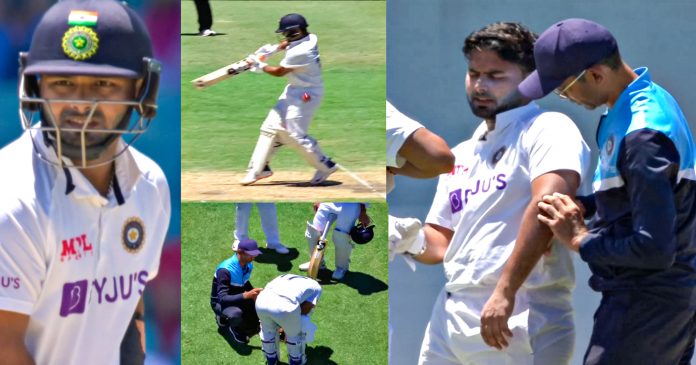 Indian wicketkeeper batsman Rishabh Pant has suffered an elbow injury in the ongoing Sydney test. Pant looked in great form and was one of the few Indian batsmen who looked to have belonged to international cricket today.

India suffered a horrendous collapse in their first innings. The visitors suffered three runouts in a bizarre innings. Batting has been the Achilles heel for India and it once came again to bite them in Sydney.

Coming to the incident of Pant, the talented youngster was peppered with short deliveries by Australian batsmen. While facing a well directed short delivery, Pant tried to pull the ball. However, it evaded his bat and hit him hard on his left elbow.

Pant was immediately on the ground and took medical assistance. Once he is taped up at the end of 85th over, Pant continued batting. He along with Pujara gave some hope to India in closing down Australia’s total.

Pant was eventually dismissed at 36 and Pujara quickly followed after scoring his slowest fifty in test cricket. The pair put on an important 53 run partnership. India have lost their way with the bat. Ravindra Jadeja added some important runs at the end to cut Australia’s lead to 94.

Rishabh Pant was hit on the left elbow while batting in the second session on Saturday. He has been taken for scans. #AUSvIND pic.twitter.com/NrUPgjAp2c


India have once again been let down by their batsmen. Despite two new comers, Indian bowling looked strong and got important wickets. But batting has been a cause of concern over the course of this series.

India were favorites to gain lead going into today’s play. However, the exact opposite happened as they gave away cheap wickets. Australian batsmen will come out to bat again and amass a considerable lead.

It will take a miracle for India to win this test match after losing their way with the bat. They were all out for a mere 244 on a wicket that offered most support to batsmen in the whole series. Pant and India will be hoping that the injury is not severe as they cannot lose another important player with injury.