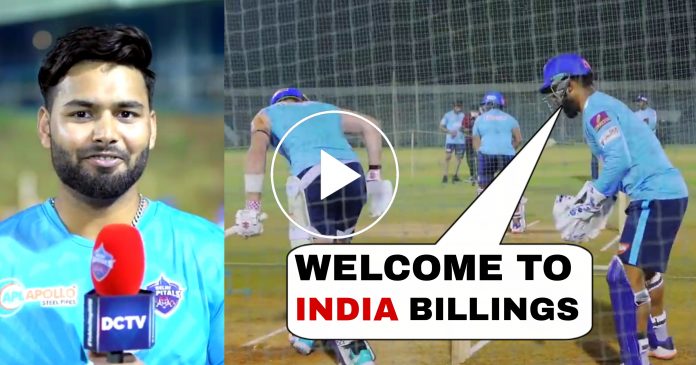 Delhi Capitals, have their first match on 10th of April. They will face, Chennai Super Kings in Wankhede stadium, Mumbai. It is the first time, that Rishabh Pant is captaining Delhi. The regular captain Shreyas Iyer, was injured days before the IPL. Hence, he was out of the tournament, due to a surgery which is required to heal him completely.

Being promoted to captaincy despite, having senior players like Ashwin, Rahane and Smith, Pant has his task cut out. In absence of Iyer who was, not only a captain but a good batsman for his team, Pant needs to strike the balance of the team. The team missed out on IPL trophy, as they fell on the final hurdle. Mumbai Indians beat them, in a one sided encounter in the final.

This time though, Pant has said that he is determined, to go one better and cross the final hurdle. Accordingly, the Delhi Capitals can be seen preparing in the nets, and are doing a rigorous training so, that they can emerge victorious.

Captain Rishabh Pant, will have three tasks in the team. To bat, Keep and captain the side. Also, all eyes will be on Pant’s performances. The kind of sensational display, he has put up on the cricket field, in the last six months, Delhi’s fans hope that he, would repeat his heroics for his franchise, and lead the team to its first IPL trophy.

Recently, Delhi Capitals has uploaded a video. In the video, Pant is keeping to an overseas batsman, most presumably English batsman, Sam Billings. Just like the previous Indian series of Australia and England, where Pant’s commentary from behind the stumps, made him a crowd favorite, he was again seeing saying something, to his English team mate while keeping.

After the batsman, gets beaten by spin, Pant says- “Yes the length is very good”. To this the batsman says – ” Welcome to India”. Again, Pant says – Its still better than Chennai test wickets ( Reference to 2nd test match between India and England that was a turner). Then he further taunts, the overseas batter by saying – “Bowled! Someone is not hitting”. He meant to say that the, overseas batter was struggling against spin, and was not hitting like he should, do to a spinner in a T20 game and put him under pressure.

Watch the video of this clip here: