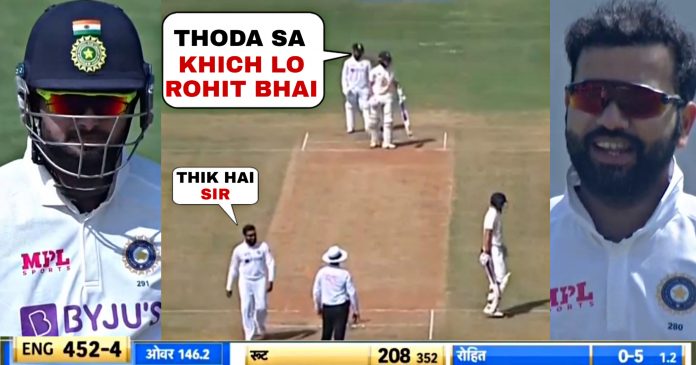 He kept joking on multiple instances to keep his teammates on high energy. His chirpiness has brought chuckle not just to his teammates but to commentators and fans alike. India were outplayed by England batsmen so far.

The bowlers have worked hard but they could not get any purchase from the Chepauk wicket. It has been another dull day for India although they staged a late comeback on the day. But Pant did not budge and was always cheerful, alert to the on goings on the field.

He often supported and motivated bowlers when England batsmen were going hard on Indian bowlers. One of the most hilarious moments of the day happened when Rohit Sharma came onto bowl.

It is not often Rohit Sharma bowls, but Virat Kohli had decided to try his luck for a couple of overs. At first, Pant shouted instructions to Rohit Sharma.

Rishabh Pant was also animated during Rohit’s second over. In an attempt to cheer him up, Pant said “A, Rohit Bhai“.

Fans had a chuckle and soon the social media was all over it. Some even managed to outdo the original funny incident and made it even more funny.

Pant has been quite an asset for India in the last couple of months. Despite having a poor IPL 2020 and dropped from both ODI and T20 series, Pant came back very strongly. He eventually made a name for himself by finishing as top scorer in Australia test series.

Pant was selected ahead of Saha for the first test. Although, he needs to improve his keeping a bit, Pant is a terrific batsman which plays in his favor. Coming to the test, England batsmen once again punched above their weight.

All the batsmen have managed to apply themselves and the pitch favored them. Joe Root was the star once again as he scored yet another double hundred. Indian bowlers managed to take four wickets in the final session but England already post 550 on the board.