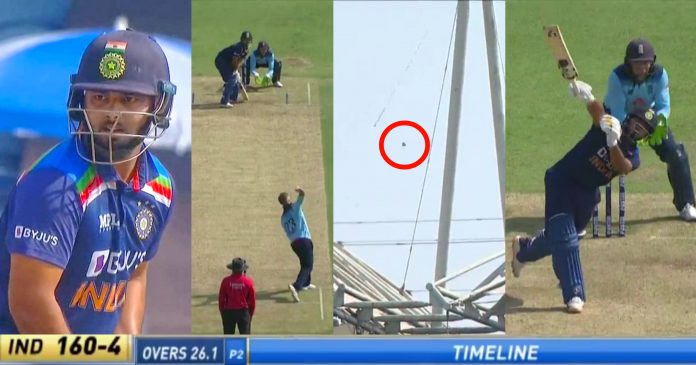 India are playing the third ODI vs England today. England won the toss and elected to bowl first. The Indian openers added a 103 runs for the first wicket in a fantastic opening partnership. After that, the innings got derailed and wickets fell quickly.

However, it was not all doom and gloom for India. The Indian team scored 329 runs in their innings before being bundled out in 48.2 overs. The last four wickets fell again in a space of 8 runs. As soon as Shardul Thakur was dismissed, the innings folded quickly in search of quick runs.

But it was the innings of Rishabh Pant and Hardik Pandya which made reach the target of 329. The two played blinders of a knock taking the attack to England. While Pant made 78 runs in 62 balls, Hardik Pandya thumped 64 in 44 balls. Both hit eight sixes between them. Pant’s share was four sixes while Pandya too carved four sixes.

Pant was specially brutal on England spinners. He was in sensational touch from the word go. Such was his supreme confidence that he had the audacity to hit a six that was manufactured totally by one hand!

Livingstone was bowling the 27th over of the innings. His tweaking deliveries was just the kind of thing Pant was looking to hit. On the second ball of the over, Pant had made his mind to smash it out of the park. However the ball was pitched just a shade shorter than what Pant was waiting for.

He still went for the shot! The south paw relied on his brute strength and just thumped the ball with all his might. Such was the force generated in the shot that his one hand came off the handle of the bat. Guess what, still the ball sailed over the ropes for a six over the sight screen!

It was a testimony to the immense physical strength Pant possess. Not only he relies on hand eye co ordination, he trusts even his physical prowess to hit big shots. More often than not, he succeeds in that.

Watch the video of Pant hitting a one handed six: