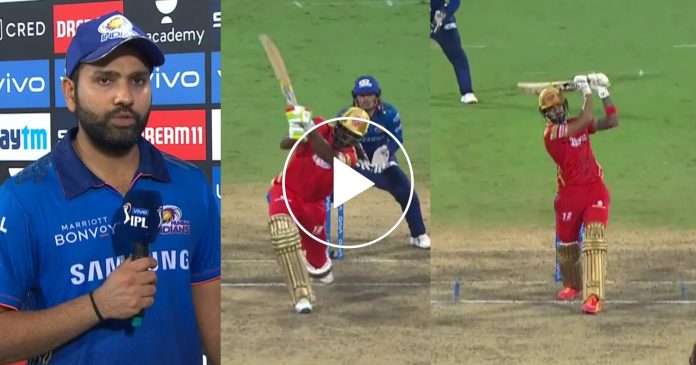 Mumbai Indians lost, their second successive game, today in the IPL. In the last game, they were defeated by Delhi Capitals. Today, they got smashed by Punjab Kings. For the two-time defending champion, to lose two consecutive match is a cause of concern. That was also confirmed by Rohit Sharma.

He was asked the same at, the post match presentation. Then, the victorious captain of 5 IPL trophies, said that they, just could not score enough runs. He felt that it wasn’t a bad wicket at all to bat. They should have got around 150, so that they would have been in the game. Also, this is a cause of concern as their batting, has failed in the last 2 games. As a batting unit, they need to have a look at it.

Rohit becomes emotional after 2 back to back loss

Then Rohit said, that it can be understood in both ways, as the opposition bowlers also bowled well in the power play. But still, they should have gotten, at least 30 more runs. Rohit then, defended the poor Batting of Ishaan Kishan. The left hander made just six runs in 17 balls. Rohit said that he tried to hit, but could not time the ball, as well as he would liked.

Even myself (Rohit himself) failed to properly time the ball. Then Rohit said that they are missing, batting 20 overs like they really want to, and sending Kishan at number 3 was just a tactical thing. Since, Surya Kumar Yadav is a good player against spinners and it, suited him more to be in the middle over as the wicket was dry.

They needed a proper player of spin, in the middle over. Then he went on to add that it was like a gamble, which looks good when is paid off and looks horrible, when it doesn’t. Also, it wasn’t the decision of just one person but, the entire team management, of sending Surya Kumar Yadav at number 4.

Lastly Rohit finished his statement, by saying that they really need, to understand that how to bat and ball when the pitch, doesn’t suit their style of cricket.

Watch the statement of Rohit here: