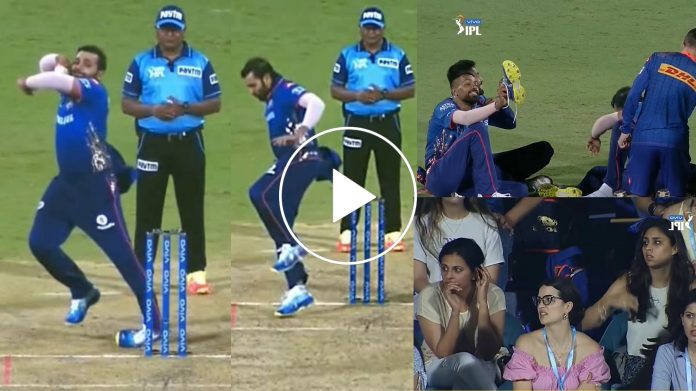 The five times IPL champions came roaring back in the game by some margin. They snatched the victory from the jaws of Kolkata Knight Riders as the latter could only watch helplessly when the match slipped away from them. Accordingly, it was brilliant death over bowling by Mumbai Indians.

Amidst all the drama and moments in the match, one moment stood out. It was Rohit Sharma bowling off spinners after many years in any kind of cricket. On a wicket that was slow and turning a bit, Rohit decided to bowl tweakers.

He came to bowl when two left handers were batting in the form of Nitish Rana and Kolkata skipper Eoin Morgan. However, something happened instantly which brought sweat on the face of many Indians and was heart in the mouth moment for Mumbai Indians.

As soon as Rohit came to bowl, he twisted his left ankle. It was terribly painful for him as his reaction showed. He was grimacing in pain as the entire Mumbai Indians team and support staff waited anxiously on the injury condition of their skipper. Even his wife Ritika Sajdeh looked worried in the stands.

The Mumbai Indians physio came running to attend their captain and Hardik Pandya and Surya Kumar Yadav sat next to Rohit to support him physically. After a bit of magic spray on his ankle, Rohit was ready to wear his shoes and start bowling.

First ball by him to Shakib almost resulted in a wicket. A short delivery was tried to cut by the batsman but the ball took his inside edge and just evaded the stumps for a boundary beating wicket keepe Quinton de Kock. It was a close shave for Shakib.

The next five balls conceded five singles as nine runs came off the over that had a lot of drama. Fortunately for India and Mumbai Indians, Rohit came off unscathed.

Watch: Sundar Tells Pant And Smashes Cummins For Six Next Over

Watch brilliant 50 by Faf as he targets Bumrah