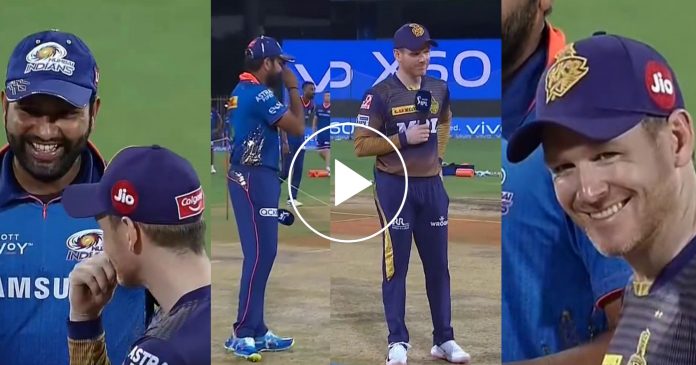 Mumbai have a huge advantage over Kolkata. They have beaten Kolkata 21 times in 27 encounters between the two sides. Out of the last 10 matches between two sides, Mumbai have won nine games. This shows that Mumbai have pretty much a one sided record against Kolkata Knight Riders.

The four overseas players for Mumbai are Quinton De Kock, Kieron Pollard, Marco Jansen and Trent Boult. For Kolkata, the four foreign players are Eoin Morgan, Shakib Al Hasan, Andre Russel and Pat Cummins. The only change which Mumbai made to their team from previous game is that opener Chris Lynn is out and Quinton De Kock comes in.

Despite the fact that Chris Lynn made 49 runs in the last game against Royal Challengers Bangalore and was his side’s top scorer, he is replaced by Quinton De Kock who will open and also keep the wickets.

A funny moment happened at the toss, although. Eoin Morgan and Rohit Sharma went for the toss. It was the Kolkata Knight Riders skipper Morgan who was holding the coin and flipped the coin. Rohit called for the heads but the coin fell on tails. Once again, Rohit had lost the toss like in the previous game against Royal Challengers.

As soon as the he lost the toss, he started giggling while keeping his hand at his mouth. He gave the gesture that he already knew as if he would loss the toss. Seeing him giggle, Morgan and Mark Nicholas, the presenter both gave a smile. It was a comical moment as far as the toss was concerned.

After winning the toss, Kolkata decided to field first. This is a trend that has come in this year’s IPL where teams expect it that batting second will be easier due to the dew factor.