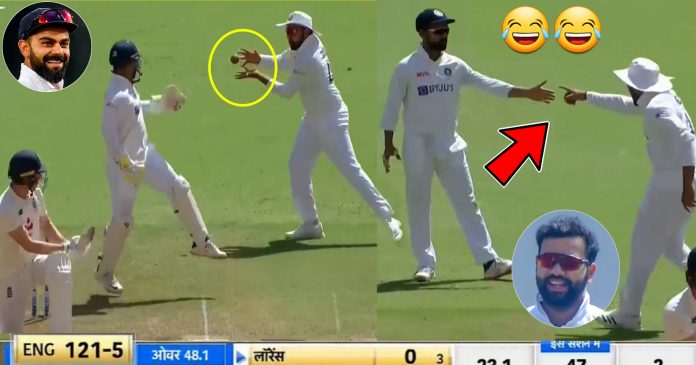 The fourth test between England and India has begun in Ahmedabad. India needs to win or draw this test to win the series. If India manages to do this, they will not only win the series, but also reach the finals of the World Test Championship. There, India will meet New Zealand, who have already reached the finals. The final will be held at Lords from June 18.

England won the toss in the test and batted first. There was too much criticism of the wickets in the previous two games. So, all eyes were on the kind of pitch which will be rolled out for the last test.

The pitch, however was found good for all with its good bounce and carry. Also, there was  less turn and minimal dry patch on the wicket.

England had gone in with two changes as they rested Broad and Archer and brought. They brought in Dan Lawrence, an extra batsman and Dom Bess, an extra seamer to counter the dry wickets.

However, England could not capitalize on batting front as they had another ordinary show with bat. They were bundled out for 205 with Ashwin and Axar again picking up 7 wickets between them and Siraj picking up 2 wickets. Washington Sundar picked up a solitary wicket.

Amongst all these, there was no shortage of entertainment on the cricket field between the two teams.

One of these happened during the 49th over of the English innings. The England team were again in spot of bother at 121-5 and the new batsman Dan Lawrence had just come in. India were looking to tighten their grip on the game with spinners getting a hold of the wicket and the batsmen.

Washington Sunder started to bowl the 49th over when Lawrence was batting. The second ball he faced, he tried to sweep. However, his attempted shot missed the ball as it thudded into the pads and the ball bounced off it and went straight into the hands of leg slip. Rohit Sharma was the man stationed there.

Rohit caught the ball and after catching it, went straight up with his fingers raised as if asking a question whether the batsman had edged it.

But, the twist in the tail was that he hadn’t asked the question to umpire but to the man stationed at slips, India’s vice captain, Ajinkya Rahane!

It was a rather cheekily done act, just, to lighten the things up. A rather, playful act, done by India’s senior most opener. Acts like these keep the fans and spectators in a rather jovial mood.

Watch a huge six by Rohit Sharma. The ball disappears

Watch: Brilliant Bowling skills of Arjun Tendulkar who is sold for 20lakhs in IPL...