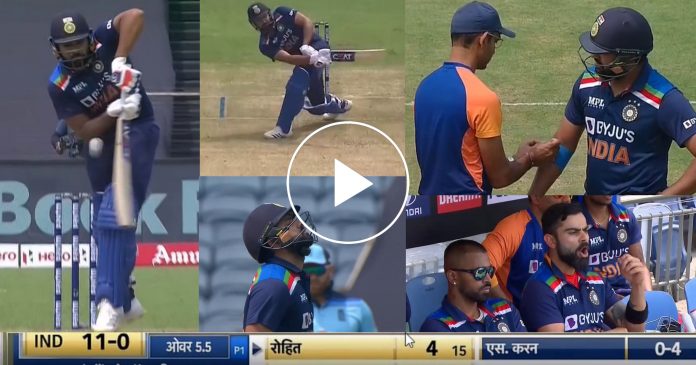 India and England are now playing an ODI series of 3 matches. After the successful completion of Tests and T20 series, both the teams will compete in the One day internationals. This will be the last international series for India as IPL begins in just over two weeks from now on.

England won the toss and elected to field first. For England, Jofra Archer is missing due to injury. He has gone back home for medical treatment. Meanwhile, India is playing with two debutantes. Those are fast bowler Prasidh Krishna and spin allrounder Krunal Pandya. While Pandya has played many T20 games for India, Prasidh Krishna will be in Indian colors, for the first time in any format.

The Indian openers Rohit Sharma and Shikhar Dhawan, started with a note of caution. Also, Mark Wood and Sam Curran too bowled with good pace and accurate lines. However, one such incident occurred in the fifth over of the innings which is worth mentioning.

English pacer Mark Wood was absolutely firing the balls at speed, in excess of 145 and looked the most threatening of all. After bowling three good deliveries, he bowled one on a hard length which rose alarmingly from the pitch. Before Rohit could properly defend it, the ball struck him flush on the elbow in a dangerous blow. The speed of the ball was clocked at 148km!

Naturally, the play was stopped for some time as Rohit took some time to recover from the pain it caused him. Team physio gave him the required treatment as, Rohit took strike again. The next two balls were again dots, as the over turned out to be maiden.

In the next over of Wood, came the revenge moment of Rohit. It was the 9th over of the innings, when both the players were up against each other, again. However, this time it was Rohit Sharma who came out on top.

After playing four dots, Sharma just flayed one through the covers for an imperious shot. It was a four the moment it left the bat. The next ball was a more classical stuff by the batsman.

It was delivered on a length and Rohit just caressed it, via a straight drive for a beautiful four. While the previous four was it all through the air, this one never left the ground.

Watch the video of Rohit getting injured and then hits 4,4: