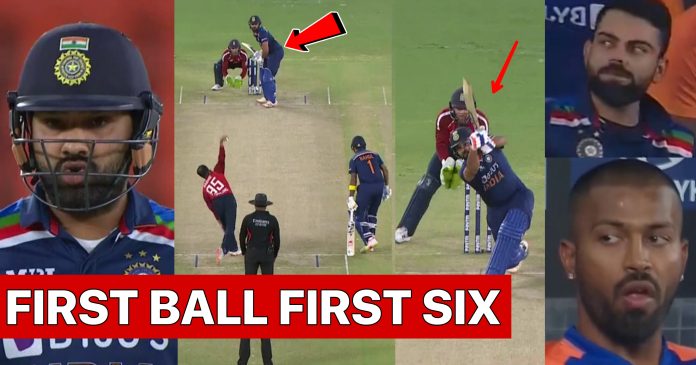 The fourth match of the T20 series is underway. England have won the toss and decided to field first. In this match, the Indian team has gone with two changes. Yuzvendra Chahal has been dropped owing to his poor form and Rahul Chahar gets a debut. Additionally, Ishan Kishan is out with a niggle and ahead of him, Surya Kumar Yadav is playing.

England has gone unchanged in this match. They are again relying on their pace bowlers namely Jofra Archer, Chris Jordan and Mark Wood who can crank it up to 150+. Moreover, Adil Rashid is the lone spinner for England.

Batting first, the Indian team sent their openers Rohit Sharma and KL Rahul. Both of them had struggled in the previous match. While Rahul was dismissed for a duck, Rohit was gone for 15 runs in 17 deliveries.

For England, Adil Rashid bowled the first over. He has achieved a bit of success in the first 3 games. Hence, this was the reason why England captain Eoin Morgan sent him to bowl the first over of the game.

With Rohit Sharma on strike facing the first ball, Rashid bowled a flighted delivery. However, the batsman smashed it for a huge six over long off! Yes, the first ball of the match was dismissed for a six by the batsman.

It was unexpected as no one imagines the first ball to be hit for a six, unless its a super over. But Rohit Sharma defied the expectations by launching it for a maximum. However, he wasn’t done with that. The third ball of the over was again bashed on the leg side to collect a four. The ghost of Adil Rashid in the first over was disappeared by two strokes from Rohit. India collected 12 runs off it and got off to a great start.

However, Rohit could not carry on the innings as he was soon dismissed by pacer Jofra Archer. The batsman could not read the slower ball of the bowler as he totally mistimed it and returned a simple catch to Jofra Archer. Rohit made a run a ball 12.

*India needs to win this game to stay alive in the series. a defeat in this match means that India will lose the series.

Watch the video of Rohit’s six on the first ball: