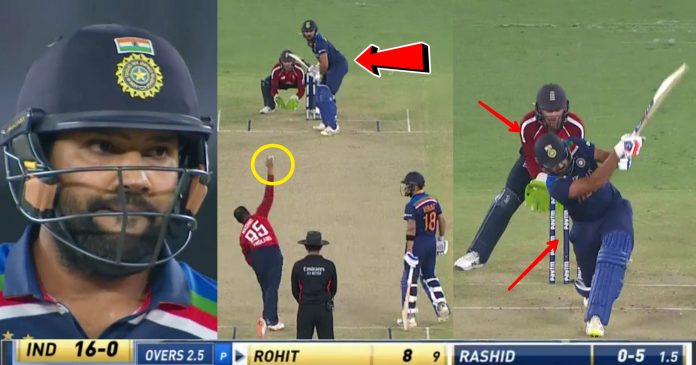 India and England are now playing the fifth match of the T20 series. This is the last and final game of the series. Additionally, it is a winner takes all clash. Both the teams are tied at 2-2 and whoever wins the match, wins the series.

England have won the toss and their captain Eoin Morgan decided to field first. The English team have gone in without any change comparing to previous game. India on the other side, have replaced a struggling KL Rahul with the death over specialist T Natarajan.

The reason for this was to go in with 5 specialist bowlers and one all rounder in the form of Hardik Pandya.

In absence of KL Rahul, Virat Kohli is opening the innings with Rohit Sharma. The first over was bowled by leg spinner Adil Rashid. The leggie, started on  a tidy note and gave just 3 runs. Jofra Archer proved expensive in the next over as he leaked 10 runs.

Rohit hits a six in third over

Rashid again bowled the third over of the innings and was pretty good in the first five balls. he gave just 3 runs and appeared that the over will be a good one for England. However, Rohit had other ideas.

The last ball of the over was a fuller length right under the eyes of Rohit. As soon as the batter saw it in his hitting zone, Rohit’s instincts took over. He bent his knees, went down and out came a lovely bat swing to absolutely nail the shot.

The hit went for a six over mid wicket for a huge six. It was the first six of the match. That shot also meant that Rohit is in ominous mood and pristine touch. Moreover, he looks all set to get a big one in this all important final match of the series.

After looking good in the test series, Rohit has struggled in the T20 series with few cheap scores. However, this innings might just change it all.

The way Rohit is playing, India looks good to score more than 200.