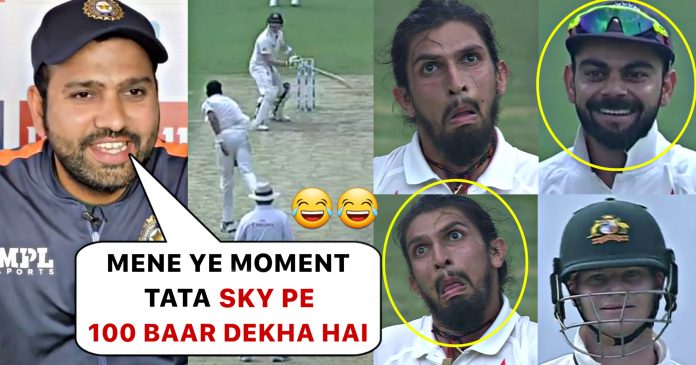 Star Indian opening batsman Rohit Sharma, while addressing a press conference for the third test match between India and England, shared a really funny incident about Ishant Sharma that had left him to splits.

In reply to the question of a reporter about Rohit’s most funny incident with Ishant, the batter said that the funniest incident, which he remembers happened during a test match. Most interesting part about the match is that Rohit wasn’t even part of this match.

This test match was happening in the season 2017. India was hosting Australia for the Border-Gavaskar trophy in a four match test series. The Indian team had lost the first match by a huge margin of 333 runs. They were trailing by 0-1 while going into the second match.

The second match started in Bangalore. India were under pressure to win the match and get level in series. They batted first, but the batting couldn’t fire at all. The result of poor batting was that the team was all out for 189 runs. Nathan Lyon, the Australian spinner took a career best 8 wickets for 50 runs.

Answering to India’s first innings, Australia was batting in solid way. They were looking good to take a huge first innings lead and push India out of the match. Also, their captain Steve Smith, was looking in great touch. India needed something out of the blue to dismiss him. That is when Ishant Sharma came on to bowl to Steve Smith in the 27th over of the match with Australia going strong at 59-1. As Ishant delivered the ball, Smith tried to defend it. However due to the low bounce of the pitch, the ball didn’t rise and passed sneakily under the bat of Steve Smith, making him look really awkward.

When Ishant saw this, he mocked Steve Smith with a really funny yet weird faces in a span of 5-6 seconds. It left everyone in a state of splits. Ishant possibly, tried to imitate Steve Smith as while defending the delivery, he had looked really awkward. Such natural was the imitation that no one could control the laughter it generated.

The captain Virat Kohli specially, found this super funny and had a good heartily laugh from behind the wicket. Even Steve Smith, could not understand what was going on when Ishant Sharma imitated him. He was left wondering about the actions of Ishant and the reaction of close in fielders!

Such was the pressure in the game on the Indian bowlers that, while everyone was laughing around him, Ishant quietly went back to his mark to bowl the next delivery as if nothing had happened!!! 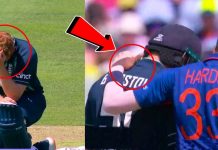