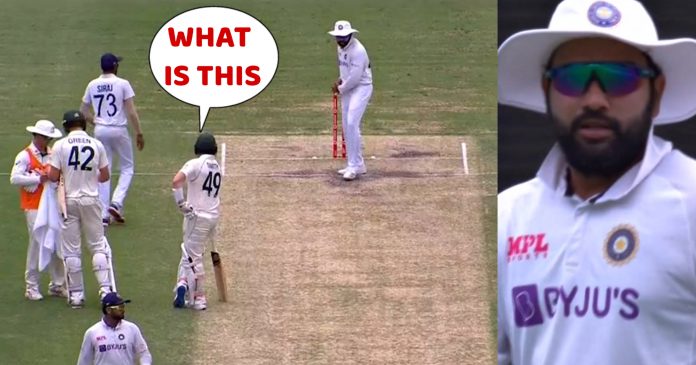 Rohit Sharma is enjoying his stay in Australia. With the series level at 1-1 and the amount of tension on the ground at a high, Rohit Sharma went back to mind games.

He then scuffed the guard marks made by Rishabh Pant. Fans fumed on Smith’s act at Sydney as many considered it against the spirit of the game. Despite Australia denying Smith’s wrong doings, the act has not gone down well with cricket fans in general.

Rohit Sharma, who has joined the team ahead of Sydney test, has mocked Smith comically. He reminded him of his own antics by performing shadow batting in front of him. Rohit then casually moved to the other end but the video has gone viral.

Unlike Smith, Rohit Sharma did not scuff the guard marks on the crease. Indian bowlers once again bowled brilliantly on day 4 as they brought India back into the game. After a fierce resilience on day 3, the visitors are upbeat and positive.

However, Australia are still slightly ahead with the bat as Brisbane wicket continues to open up new cracks. It is going to be a tough fight for Indian batsmen. Steve Smith helped Australia’s dominance with the bat with yet another fifty.

He scored runs freely and increased the tempo of scoring. Although, he was given a life by Siraj when dropped at long on, the bowler came back to take his wicket. It was a brilliant bouncer to bring curtains to Smith’s innings.

India will now look to dismiss Australia under the lead of 300. Both Mohammad Siraj and Shardul Thakur impressed with the ball. The duo took three wickets each at the time of writing.

Australia are looking to build a lead above 300 and then declare. But rain could still have a role to play in Brisbane test. So all the three possibilities are still in play. We are in for a grand finale on final day to end a terrific test series.

Watch : Rohit Sharma hits 2 fours in 1 over to Tim Southee in...