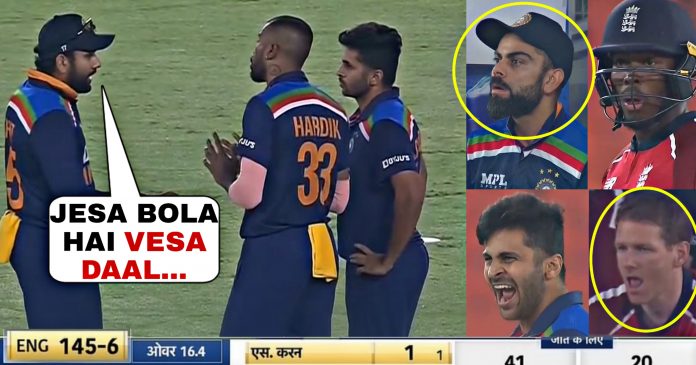 India have won the fourth match by   runs to level the series 2-2. It was a rather come from behind victory by the Indians. England had won the toss and opted to bowl first. Considering that the previous three victories were achieved by teams chasing, England preferred chase.

The openers collected 10 runs in the opening over before both the openers were again dismissed cheaply. However, this time Surya Kumar Yadav played a breath taking knock of 57 to set up a base for the Indian team.

Kohli was sent to the pavilion cheaply again by leg spinner Adil Rashid and Hardik Pandya too could not find his hitting range. But, Shreyas Iyer played a little cameo as did Rishabh Pant. On the back of these innings, India finished with a good total of 185-8.

For England, Jofra Archer was the most successful bowler taking 4 wickets for 33 runs.

England looked favourites at half way

On a placid batting wicket and in dewy conditions, England looked good to seal the chase and the match till the 15th over.

But then, the match turned on its head in the final 5 overs. With a well set Stokes and skipper Morgan batting, England required a further 54 runs. However, the English team lost Morgan and then Stokes in quick succession.

It brought down the equation to 39 runs off final 18 balls as Virat Kohli went off to the dug outs. That brought Rohit Sharma to the captaincy of Indian team. The stand in captain then used his resources brilliantly. 18th over was given to Pandya who gave just 6 runs and a wicket.

In the 19 th over, Bhuvaneshwar conceded a mere 10 runs. Last over was bowled by Shardul Thakur who had the cushion of 23 runs to defend.

Of the first ball, just a single was taken. On the second ball, Archer thumped a boundary while he smashed a six on the following delivery. With 11 runs in the first 3, the pressure was on the Indian bowler. It showed as well as he delivered wides on the next two bringing the required run to just 10 in 3 balls.

Rohit then called Thakur for a quick chat and gave him some much needed confidence. It worked for the bowler as he conceded just a single and then dismissed Chris Jordan on the next ball. The wicket took India to victory.

Rohit again displayed his cool captaincy by not bucking under pressure. Also, it was calm bowling exhibition in death overs by Thakur.

Watch the prize and awards of players in finals of RSWS.