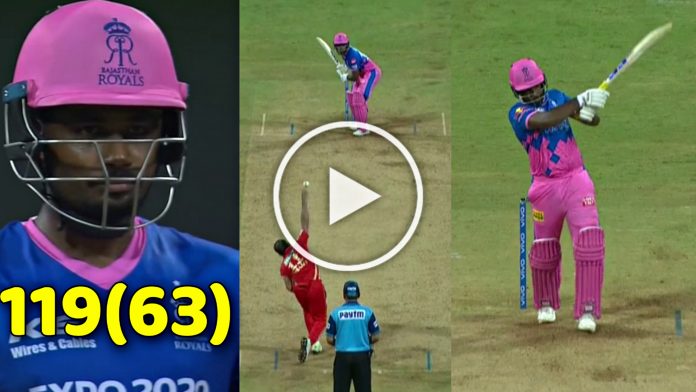 Sanju Samson lit up the IPL 2021 with an amazing century. He played a brilliant innings of 119 in 63 balls that includes 7 collosal sixes. The only short coming that was of his innings was that he could not take his team to victory.

Other than that, it was a masterclass. He started the innings on the fourth ball of the first over. Ben Stokes had just got out and Samson had to score big in order to have any chances of victory to Rajasthan. Accordingly, he began with strokes that is related with him.

All those late cuts, jabs and pulls were out in full flow as he began to take advantage of dew and small ground. Samson’s 50 came in 33 balls which had 7 fours and 2 sixes. He formed valuable partnerships with Jos Butter, then with Shivam Dube and finally with Riyan Parag.

These four batsmen kept Rajasthan Royals in the hunt of the massive target that was set for them.

Samson completed his hundred in 54 balls. By that time he had hit 5 sixes and 12 fours. Jhye Richardson in the 18th over bore the brunt of Samson’s bat. He was hit for a four, four and a six as Sanju had his century.

However, this did not proved to be a match winning one. Rajasthan had to lose the match by 4 runs as Punjab Kings saved the match by some amazing death bowling. Consequently, Only seventeen runs came in the final two overs.

After the match, Samson told to the presenter that he was disappointed over not being able to finish the match.” It was there in the hitting zone and he backed him self to clear it. However, it could not happen” Said Samson.

In a match that went down to the wire, close margins, decisions and small errors are enough to decide the victor and the loser. This is exactly what happened in Rajasthan vs Punjab as well.

Despite hitting a century, Samson failed to take his team over the line as dropped catches came back to haunt them.

What a Brilliant Knock by Sanju
Samson's valiant 119 off 63 balls https://t.co/HoibFXejrI