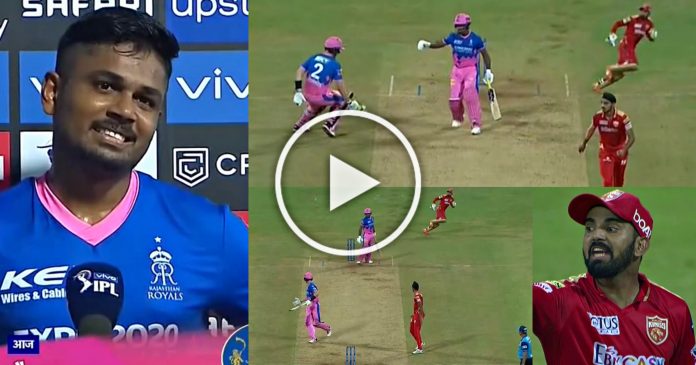 An emotional Sanju Samson was left speechless after his team failed to win the match against Punjab Kings. It was a match they should have won but instead they were met with defeat. A lot of people blamed Sanju Samson for the loss.

They said that it is totally his fault that Rajasthan lost. He did not take a single and gave the strike to Chris Morris. Morris could have also hit a long ball and big hits when required.

However, that moment never arrived as Samson decided to finish the match all by himself. But, he failed miserably in that.

After the match, Sanju Samson was asked about his innings. To this Samson replied, “I don’t have words to explain my feelings. Would have loved to win the game off for my team. I don’t think I could have done better than that. I thought I timed it well for a six but somehow it got caught”.

Samson was quite breathless and his words stopped in his mouth when he tried to speak quickly. It was the effect of both the innings and the pressure situation he was in through out the game. He could not speak clearly for the first few minutes before regaining his breath and saying what he wanted to say.

The Rajasthan captain actually wanted to say that in the last over when just 2 balls were remaining and 5 runs were required, he backed himself to clear the ropes and win the match for Rajasthan.

However, this could not happen twice. On the penultimate ball, his shot went straight to long off while on the last ball, he could only hit it in the air as far as extra cover and was out. He said that it was disappointing that being as a captain of the team, he should have finished it off but failed to do his duty.

This statement by Samson was quite emotional as he had his throat almost choked while saying this. It is true that it was a game of fine margins and on any other day, the ball could have gone over or either side of extra cover and the match could have had a different result. But, it did not happen.

Watch : Neil Wagner great comeback against Broad after getting hit for 6