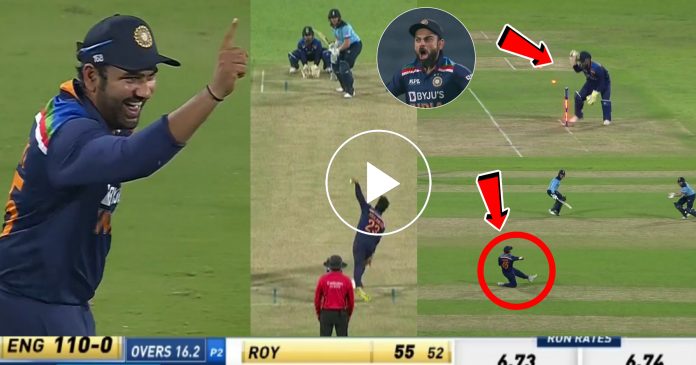 Rohit Sharma has always been accused of being not so fit as compared to the other Indian players. There is some or the other news revolving around that he barely passes the yo-yo test, the benchmark for the fitness of Indian players. It leads to the conclusion that his fielding skills are lesser than other players of Indian team due to lesser fitness.

However, Rohit put an end to all these allegations by a brilliant bit of fielding in the second ODI. This unbelievable effort from Rohit earned India a much needed break though out of nowhere.

Chasing the Indian target of 337, England openers got them off to a flying start. Just like in the previous game, they scored at will. Without taking too much of a risk, the openers scored at close to 7 runs an over. Roy scored a 50 in 48 balls which had seven fours and a six.

The duo brought their second consecutive 100+ open0ing partnership vs India as they looked increasingly threatening. It was here that Rohit showed his magic in the field. Kuldeep bowled the 17th over of the innings as Bairstow smashed him for a huge six. It was followed by a double.

At 110-0 in 16.2 overs, Kuldeep bowled the third delivery of the over. Bairstow flicked a delivery to short mid wicket where Rohit was positioned. He dived full length to intercept the ball which was passing quickly. Hence, the fielder picked up the ball with one hand and in one motion threw the ball to the keeper.

Both the batsmen were confused as to where the ball had gone and started running for a single. By the time they realized that the ball had not gone anywhere and was in the hands of Rohit only, they already had run half way down the crease. But the throw from Rohit was spot on and wicket keeper Rishabh Pant collected the throw. In the next moment, the bails were whipped off by Pant.

Since it was Jonny Bairstow who was running to the strikers end, he was the man who ended up being run out. Roy made 55 in 52 balls which included 7 fours and a six.

Rishabh Pant gets out on a wrong decision. Then watch how Pant saves his...