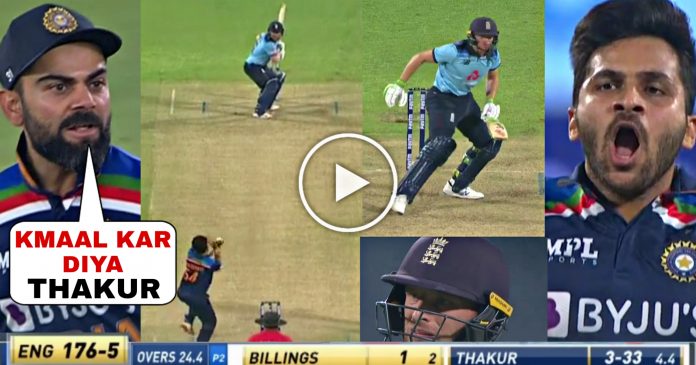 India are on the verge of victory in the first ODI vs England. Chasing a target of 318, England has collapsed to 248-9 in 41 overs. With number 11 batsman on strike, chasing 70 runs in 9 overs looks impossible. However, it wasn’t like that from the start. The England openers had started with a bang.

In pursuit of 318, the England openers went hammer and tongs. They absolutely blasted the hapless Indian bowlers to all parts of the ground. Boundaries came in virtually every over as the match looked to be slipping away quickly. In just 10 overs, England had reached 89!

The 100 of English team came in just 11.3 overs. Opener Jonny Bairstow completed his 50 in 40 balls. It included 5 fours and 3 sixes. He and Jason Roy added 135 runs in a mere 14.2 overs. It was Prasidh Krishna who broke the opening partnership. Two more wickets fell quickly but still England were in a position of strength at 175-3 in 24th over.

That is when Shardul Thakur broke open the game for India by taking two wickets in a single over. The turnaround from Thakur started when he bowled a short ball to English skipper Eoin Morgan. The south paw tried to pull but was beaten by the pace of the delivery as his attempted pull resulted in edge carrying to keeper KL Rahul.

He did not stop there only. The next wicket of the over was of another dangerous batsman, Jos Buttler. It was a length delivery which Buttler tried to flick but missed it due to the swing available. The ball thudded into his pads. Initially, it appeared that it was missing leg but the umpire gave him out.

Buttler quickly took the DRS in hope that the ball might be missing the stumps. But, even in the DRS, it was clear that the decision of the umpire was right. The ball was found clipping the leg stump and the umpire’s call stayed. Both Morgan and Buttler were out for single digit scores.

India had two wickets of two dangerous batsmen in 4 balls. Suddenly, the score of 175-3 became 175-5. England could never recover from the double whammy of Thakur as the Indian team took a massive step towards victory.

Watch the video of Shardul picking two wickets in an over:

An accurate representation of just how huge the Bairstow wicket is: #INDvENG pic.twitter.com/3lnCkdf2f9

Watch, Sanju Samson unbelievable flying catch. Leaves everyone in the stadium in shock