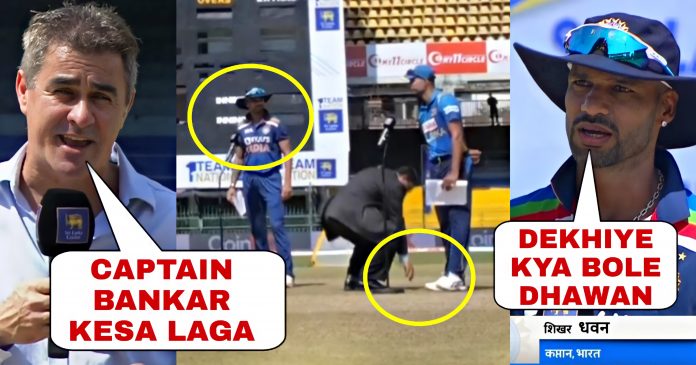 The India versus Sri Lanka limited overs series has begun. First leg of the tour would be a 3 match ODI series. The captain of India in this tour is Shikhar Dhawan. while Sri Lanka’s captain is Dasun Shanaka. Both the players would be leading their respective countries for the first time.

There was one bad news for Indian fans before the toss happened. Sanju Samson injured a ligament in his knee and hence was not available for selection for this game. This comes as a disappointment for both Samson and his fans who wanted to watch him play for the Indian team in this tour.

Meanwhile at the toss, a funny thing happened. Sri Lanka won the toss and elected to bat first. When Shikhar Dhawan was asked that what would he had done on winning the toss, his reply was rather interesting. He said :

“We also wanted to bat first as dew factor can come into play in the evening”. This was a confusing statement as anybody would know that it gets easier to bat with dew. So if a captain is expecting dew, he would prefer to chase rather than bat first. This particular statement by the captain left fans in a bit of puzzle.

Then he declared that Prithvi Shaw will partner him at the top. Shaw’s inclusion ahead of Padikkal and Ruturaj Gaikwad is not surprising since he was expected to open the innings with Dhawan. Both of them initiate the Delhi Capital innings in IPL with reasonable success.

Also, the leg spinning duo of Yuzi Chahal and Kuldeep Yadav is back in action. It is happening after a gap of close to 2 years. The last time they played together in the same match was vs England in World Cup 2019.

The two debutants for India in this match is Ishan Kishan and Surya Kumar Yadav. Interestingly both of them debuted together for India in T20 as well vs England earlier this year.

Surya Kumar Yadav will bat at number 3 while Ishan Kishan will take the crease at number 5 for the Indian team.