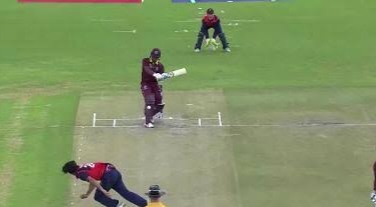 West Indies and Australia are playing the 5th and last T20 match of the bilateral series. West Indies have already won the series by winning the first 3 matches. Hence this match is inconsequential for the result of the series. Still both the teams would like to win the match and end the series on a high.

It was West Indies skipper Nicholas Pooran who won the toss and elected to bat first. The openers Andre Fletcher and Ewin Lewis gave yet another rollicking start to the home team. They smashed 40 runs in just 4 overs.

However Adam Zampa then struck. He dismissed Andre Fletcher. On the other end, Ewin Lewis batted like a dream. The left hander faced 34 balls and whacked 9 sixes in it. He lost his wicket while trying to go for the 10th six.

His first six came in the 1st over itself when he flicked a delivery over leg side for a six. A full toss was sent packing over long on for another six to the same bowler a couple of overs later.

It was followed by a six at long off on the very next delivery. Lewis got to his 50 when he cracked a 4 over point. It took the batsman just 23 balls to hit half century.

Andrew Tye received a pasting in the next over by the explosive batsman. He was thumped for 2 successive sixes over long on and long off respectively. The leg spinner Mitchell Swepson received the same punishment in the 9th over.

He too was dispatched over long on and cow corner for back to back sixes. However just when it appeared that Lewis could hit the fastest 100 by a West Indian, he was sent back to the pavilion.

The left hander tried to demolish a slower delivery of Mitch Marsh over the bowler’s head. But he was beaten by the lack of pace and mistimed the shot. Hence the ball went up in the air and he was easily taken at covers.

Also, Ewin Lewis became the quickest batsman ever to hit 100 sixes in T20I cricket. He now has 101 sixes in just 43 matches!