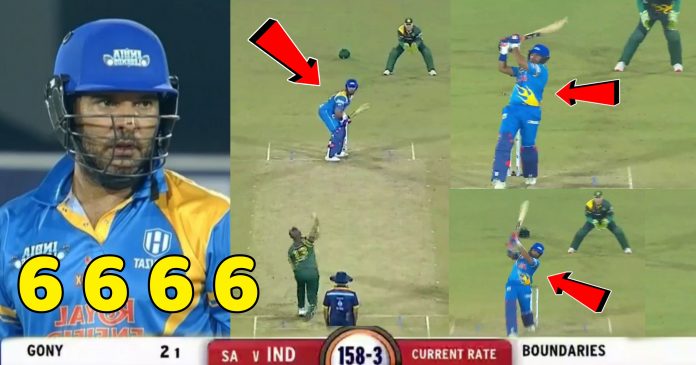 After that, Tendulkar and Badrinath played some amazing shots to keep India going. Both used the gaps of the field to their advantage and hit a few boundaries and some sixes. Badrinath hit a 34 ball 42 which included 2 sixes. He was looking good for a 50. But unfortunately, he got his muscles injured and was retired hurt.

Tendulkar on the other hand kept playing nicely as he completed his 50. It was another scintillating sight for Sachin fans as they saw him lifting the bat after many years on a cricket ground. The little master made 60 off just 37 balls. It included 9 fours and 1 six.

After Tendulkar got out while trying to up the ante, came the explosion from Yuvraj Singh. The left arm batsman was in full flow today and reminded the spectators and fans of the old and vintage Yuvraj. With the responsibility of taking India legends to a good total, Yuvi did not disappoint.

The first one who bore the brunt of Yuvraj was the bowler De Bruyn. Yuvraj took a time travel and almost did to him what he did to Stuart Broad in 2007 T20 WC. At that time, the poor bowler was smashed for 6 sixes in different parts of the cricket ground.

Today, De Bruyn felt the same brunt of Yuvi’s force. He came to bowl in the 18th over. The first ball was a dot but that was a calm before the storm. The next ball was a short delivery with low pace. It was duly dispatched by Yuvraj for a six.

The third ball of the over was a length ball and was pumped over long on by Yuvraj. Again, the fourth ball was a short and again it was bashed over mid wicket for the third consecutive six.

On the fifth ball of the over, Yuvraj thumped a slower delivery over long on for another gigantic six. It was four sixes in successive deliveries by Yuvi. 0,6,6,6,6 read the over.

With the final ball of the over, it appeared that Yuvi would hit his fifth six. However, the bowler bowled a clever delivery by coming over the wicket. Yuvraj missed his attempted stroke. Still, the bowler got punished for 4 consecutive sixes.

It was not enough for Yuvraj. He hit two more sixes in remaining overs to complete his 50 off just 21 balls. He remained unbeaten on 52 in just 22 balls. His innings had 4 boundaries and 6 huge sixes.

The innings of Yuvraj made sure that India legends crossed 200 runs which was looking very difficult when Tendulkar fell.

Also, Yusuf Pathan and MS Gony too contributed in India’s score. Pathan made 23 in 10 balls with 2 sixes while Gony made 16 in 9 balls. He also hit a really high six.

Watch the video of Yuvraj’s 4 consecutive sixes in this: