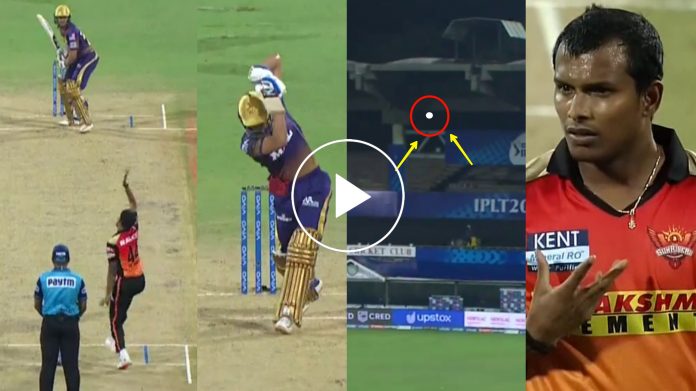 The third match of the Indian Premier League, is underway. Kolkata Knight Riders and Sunrisers Hyderabad are facing, each other for the first time in this IPL. In the last 6 matches between them, both teams have won three games each, against the other. Eoin Morgan is leading Kolkata Knight Riders while, David Warner is the captain of Sunrisers Hyderabad.

The openers for Kolkata were, Nitish Rana and Shubhman Gill. Bhuvaneshwar Kumar took the new ball for Hyderabad. The first ball of the first over, was smashed through covers for a boundary by Rana as Kolkata, opened their account. The next over bowled by, Sandeep Sharma was hit for 9 runs.

Only 6 runs came in Bhuvi’s next over, but then Sharma was carted for three consecutive boundaries in his next over by, Nitish Rana. The three fours, were in different directions from off side to leg side. 14 runs came, in this over.

Seeing the opposition, getting a quick start, Warner turned to his trump card T Natarajan who is a Yorker specialist. He, was brought in the hope that, the batsmen would play him with, a bit more care. However, Warner was in for a shock, with what happened next.

The first ball Natarajan bowled, was a length ball and right into the hitting, zone of Shubhman Gill. He just made a bit, of room by clearing the front leg, and launched Natarajan for a six over, long on. The best and amusing part, about this stroke was that while hitting the shot, Gill did not even look, at the shot.

Such was the confidence of him, in his shot that he did not bother to look up and see whether the ball, was actually going over the ropes or not. However, the ball did travel for six. Hence, it was a no look six by the youngster from Punjab.