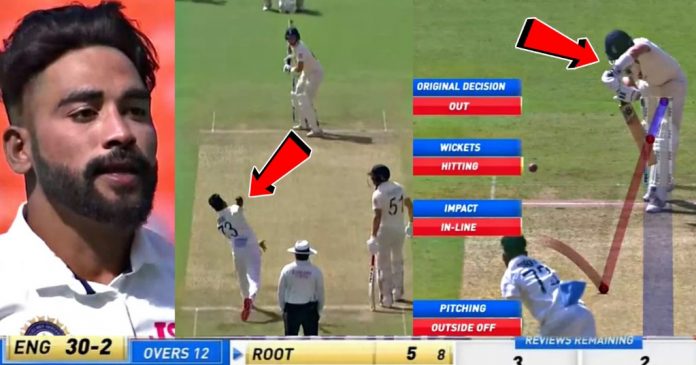 Mohammad Siraj has come off an age in the last few months. It has been nothing short of relevation for him. From being the 5th choice fast bowler a few months back, to leading the pace attack in Australia in just his second game, Siraj has seen it all in less span of time.

Siraj took his stocks a notch higher on the first morning of the final test between India and England. Playing for the second time in the series, in the absence of Jasprit Bumrah, Siraj bowled beautifully to dismiss Joe Root.

A lot of people were left wondering when India decided to play Siraj ahead of Umesha Yadav, who is more accomplished quick bowler in Indian conditions. However, Siraj showed that why was he given preference over Umesh.

Bowling at a brisk pace of 85-87 miles/ hr, Siraj set up the English captain Joe Root nicely and cleverly before getting him with a lovely in swinger.

Joe Root is the mainstay of English batting apart from being their captain. For England to put up a competitive score, It was necessary for Root to score some runs. However, Siraj made sure that none of them would happen by dismissing Root in a single digit score. It left England reeling at 30-3.

Before the over in which Siraj dismissed Root, all his deliveries to Root were outside stumps. It was actually a set up by the bowler for the batsman. As soon as the next over arrived, Siraj bowled a quick in swinger to Root who was totally caught unaware by that. His weak attempt at covering the line of the ball was missed and the ball thudded into his pads. A vociferous appeal for LBW was upheld and given OUT.

It was so much plumb that the English captain decided not to review despite all reviews remaining intact. His wicket has given England a huge blow in their pursuit of challenging first innings total.