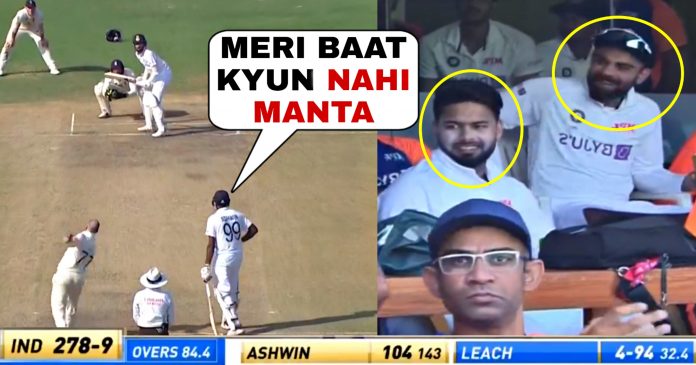 Indian cricketer Ravichandran Ashwin was at his best with the bat in the second test against England. After the visitors managed to put pedals on India’s second innings, Ashwin counter attacked English bowlers.

Despite the track turning square, Ashwin employed sweep shot and reaped high rewards. He formed a brilliant partnership with Virat Kohli to help India gain crucial runs in the lead. Once Virat Kohli was dismissed, Ashwin played brilliantly with the tail.

Although he got little support from Kuldeep Yadav, both Ishant Sharma and Mohammed Siraj ensured he batted long enough. Especially towards the end, Siraj forged a brilliant partnership with Ashwin.

The Hyderabadi batsman managed to fend off English spinners as Ashwin managed to coast to his fifth century in test cricket. Once Ashwin reached his century, Siraj started to enjoy his batting as he belted a six over long on.

But in the 85th over Jack Leach, Ashwin took a single off the fourth ball of the over. Then he cautioned Siraj to play carefully. “Oye Siraj, main tere oopar bharosa rakh ke 1 liya. Tu bhi wo bharosa rakhna, ‘ Ashwin said to Siraj.

However, Siraj had other ideas as he took on Leach and dismissed the ball over deep mid wicket boundary. Siraj played brilliantly as India amassed an impressive 481 lead. The pair put up a 49 run partnership for the final wicket before Ashwin got dismissed.

India thoroughly outplayed England in the second test in Chennai. The hosts brought their A game on a spinning track and reaped benefits. English batsmen had no idea on how to tackle both Axar Patel and Ravichandran Ashwin.

Both teams will now travel to Ahmedabad to play in the last two tests. The third test will be a day-night test with the pink ball. There could be some big changes for England after they decided to rest some key players for the final two tests.

India also could be tempted to bring Hardik Pandya into the starting XI if he can bowl. However, there is a tilt towards a pacer which could mean Jasprit Bumrah will be back into the team in place of Kuldeep Yadav.

After an impressive performance on debut, Axar Patel will play the final two tests. Even Virat Kohli has hinted on the same after the end of second test.