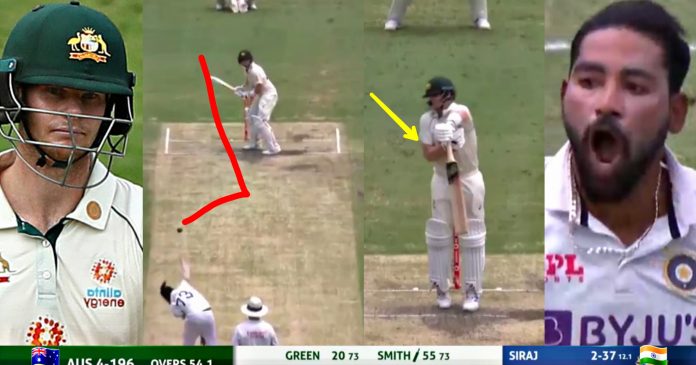 Indian pacer Mohammed Siraj has bowled a brilliant bouncer to get rid of Steve Smith. Smith was going at a good scoring rate and was helping Australia pull clear in the ongoing Brisbane test.

However, Siraj came up with a beauty to dismiss the dangerous Smith. Incidentally, he dropped Steve Smith at long on after misjudging the catch. Smith was 42 at the time and went onto make yet another half century.

Despite the terrible start to the series, Smith has come alive in the last two test matches. But Siraj managed to get him out in an important phase. Once Smith was dismissed, Australia went on a back foot and Indian bowlers came back into the match with renewed energy.

Mohammad Siraj has impressed with his bowling once again as he looks to be a bright prospect for Indian team in test cricket. After missing out on wickets in first innings, Siraj came back strongly in the second innings.

He already picked out three wickets and got lot of assistance from the pitch. On the other hand, Shardul Thakur was also incredibly good with his recent spell picking out two important wickets of Cameron Green and Tim Paine to put Australia on a back foot.

Despite all the happenings, the test match could still see all three possible outcomes. Rain has started in Brisbane test on Day 4 and it remains to be seen how long the match will be curtailed.

It is a tricky situation for Australia as they have to take weather into consideration before declaring their innings. The hosts scored 243/7 at the time of interruption and amassed a lead of 273 runs.

Brisbane pitch has cracks opened up as the match progressed. The ball is bouncing awkwardly and it will be a tricky wicket to bat on for the reminder of the test match. Although the lead is around 275 right now, it could easily be 350 runs on a normal wicket.

Should Australia decide to declare when the play resumes, Indian batsmen needs to ensure that there is no loss in wickets column going into the final day’s play. A win will help Australia win Border Gavaskar trophy after 6 years.