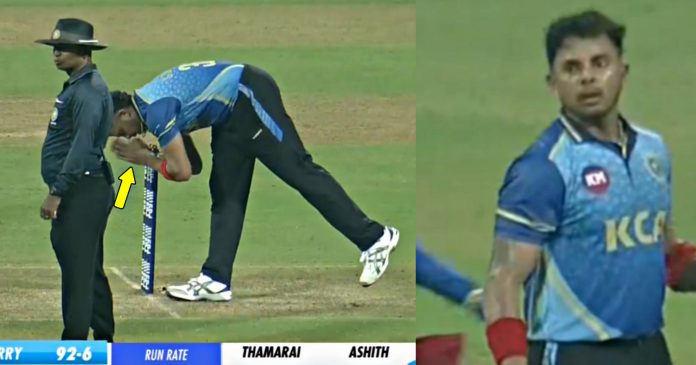 Former Indian cricketer S Sreesanth made a comeback into domestic cricket after 7 long years. The pacer’s career went down in a spiral after being named in the spot fixing scandal.

However, he managed to stay strong both mentally and physically to stage a comeback at an age of 37. It is really tough for a fast bowler to maintain his body despite not playing cricket for many years.

But Sreesanth saw his ban overturned by BCCI, and prepared for Syed Musthaq Ali Trophy with few warmup games. He was selected in the Kerala team and made his comeback against Puducherry yesterday.

Upon his return to domestic cricket, Sreesanth was very emotional. He went near the stumps and folded hands to thank cricket pitch before beginning his bowling.

And he started in some style. Sreesanth picked out the opening batsman of Puducherry, Fabid Ahmed for just 10. He swung the ball well and managed to bowled him out to pick his first wicket on his comeback.

Not just the wicket, Sreesanth was also very economical with the ball. He gave away just 29 runs in his 4 overs. This is certainly a major moment for Sreesanth as he fought very hard to get his ban overturned.

Thanks a lot for all the support and love ..it’s just the beginning..with all of ur wishes and prayers many many many more to go..❤️🇮🇳🏏lots of respect to u nd family .. #blessed #humbled #cricket #bcci #kerala #love #team #family #india #nevergiveup pic.twitter.com/bMnXbYOrHm

Meanwhile, Sreesanth has already revealed few IPL franchises are interested in signing him. If he can continue the form he showed against Puducherry, there is a good chance for Sreesanth to stage an IPL comeback in 2021.

The veteran pacer aspires to play for India in international cricket again. Also, the Kerala pacer revealed he is targeting to play in 2023 cricket world cup which will take place in India.

He will be 39 by then, but it needs lot of effort from Sreesanth. Still it is a long shot, but Sreesanth certainly made the first step in the right direction. The pacer can only go high from here after seeing the rock bottom in his career.

Fans are also happy to see him back as there was buzz around his comeback on social media. It will be interesting to see how Sreesanth performs in the coming days and whether he can stage a comeback in international cricket.