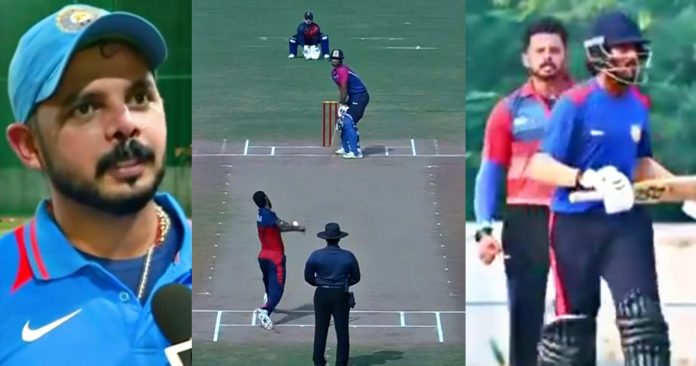 Former Indian cricketer S Sreesanth is currently working his way up the ladder. After facing so many turbulences during his career, the speedster was banned by BCCI in spot fixing scandal.

The 37-year old is set to make a comeback into competitive cricket in India for the first time since his ban. He was selected to the Syed Mushtaq Ali T20 tournament and will represent Kerala.

However, his selection is subject to his fitness levels. But Sreesanth is leaving no stone unturned despite his old age. He is gearing up for the tournament by participating in warm up matches.

Syed Musthaq Ali Trophy is the most prestigious domestic trophy for states in India. Should he be fit, Sreesanth will play under Sanju Samson. On the other hand, Suresh Raina wished good luck to the bowler ahead of his comeback.

Coming to the incident, Sreesanth is always known for his aggression during his bowling. He had his fair share of incidents while playing in IPL and for India during his earlier days.

During the warm up games, Sreesanth was seen very animated while bowling to the batters. He looked in good rhythm and was trying variations in his bowling too. He was also seen sledging and it will be interesting to see how his track back into competitive cricket will be. Syed Musthaq Ali Trophy will begin on January 10, 2021.

Here is the video of Sreesanth’s aggression

Although, he is 37, Sreesanth still wants to make a comeback into international cricket and represent India. It is tough for a veteran bowler who has not played the game for many years to manage such a comeback.

But the speedster is convinced that he could be back at the top. Sreesanth is currently eyeing a spot in 2023 World Cup. He will be close to 40 by then.

“I have been getting inquiries for IPL, too, and I have to make sure that I am fit and bowling well,” Sreesanth told TOI.

“I am not just looking at the season ahead but at the next three years. My real goal is to be in the 2023 World Cup team and win the cup,” he had mentioned.

Sreesanth was one of the very aggressive bowlers for India in 21st century. He had a good career and played a crucial role in 2007 T20 world cup win. He also had a role in 2011 world cup.

But considering the plethora of fast bowling talent in India, it is highly unlikely he could mount a comeback into ODI team. But a short spell in T20 cricket for India can never be ruled out as Nehra was a prime example.