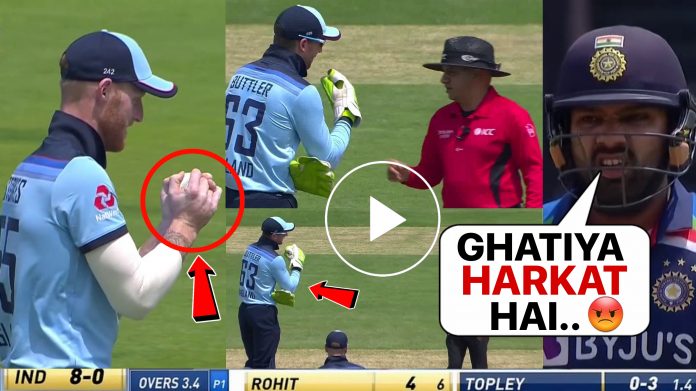 Star all-rounder of England Ben Stokes was caught in a controversy in the second ODI between India and England. The burly all rounder was applying saliva on the ball during the early part of Indian innings.

Virender Sharma, the on field umpire spotted the error quickly. He warned Stokes for doing the blunder of putting saliva on the ball.

As per protocols, the ball was sanitized by the umpires soon after. Also, both the umpires told the stand in skipper of English team Jos Buttler that another such mistake would result in a penalty of five runs for England

The incident happened during the fourth over of Indian innings. Left arm swing bowler Reece Topley had bowled a dot ball and India were eight for zero. The ball reached to the fielder Ben Stokes. He was stationed in the slips, where he mistakenly put saliva on the ball, after picking it up.

Rubbing saliva is not allowed in international cricket. This has begun from the time cricket started to happen after a long interval due to the Covid-19 pandemic across the world.

Moreover, it is not the first time that Stokes has been under the scanner for rubbing saliva on the ball. Earlier in this tour, the English stalwart had done the same error on the first day of the pink ball Test between India and England in Ahmedabad. There also, he was given a stern warning about not to repeat his mistake.

Earlier, India got off to a poor start with the bat after losing the toss. Dhawan was dismissed at four while Rohit made a run a ball 25 runs. Kohli and KL Rahul then added more than 100 runs for the third wicket as both the batsmen reached their respective fifties.

However, Kohli again missed out on his century. He made 66 runs before being sent back to the pavilion by spinner Adil Rashid. The wait for a century from Kohli continues to grow. It was in November 2019 that a century came out of Kohli’s bat. Since then, he has been consistently getting half centuries but the century is yet to be scored by Kohli.

Watch exciting 18th over of the Hyderabad innings. loses 2 wickets and take 11...