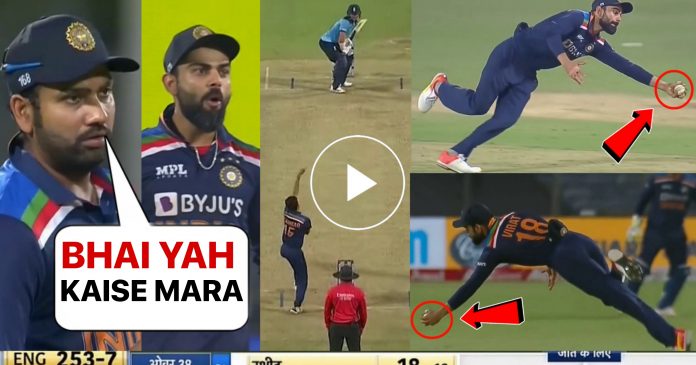 India is on the verge of victory in the final ODI. England have lost 8 wickets with still more than 50 runs to get. With just tail enders remaining to bat, the chances of England scoring the required target looks improbable.

England required 330 runs at the start to win the match. But they had the worst start in every way possible. Both the openers who had added a century partnership in the first two games were gone for cheap scores.

Jason Roy was out in the first over after clattering Bhuvaneshwar Kumar for three boundaries. He was cleaned up by the same bowler. In the next over of Bhuvi, Jonny Bairstow too was dismissed when he was found in front of the wicket.

Stokes and Malan tried to rectify the innings. Both got their starts but could not continue for too long. Stokes made 35 and Malan made 50 before getting out.

After that none of the top order batsmen had the stomach to dig in and they kept losing wickets. Soon the English score became 200-7 in 31st over. With Sam Curran at the crease, came Adil Rashid at number 9 to support him.

The duo had added 58 runs for the eighth wicket and were looking increasingly threatening with every passing run. Then came Shardul Thakur to bowl.

Adil Rashid was facing Shardul Thakur. It was a slower delivery at a hard length. The batsman went forward and tried to hit it over covers. However the ball beat him in pace and went straight towards cover while still in the air.

After taking the catch, Kohli threw the ball in disbelief as even he could not quite believe that he took the catch. By his own standards, it seemed a sensational stuff by the Indian skipper.

That wicket came at just the right time and India could afford to relax by that.