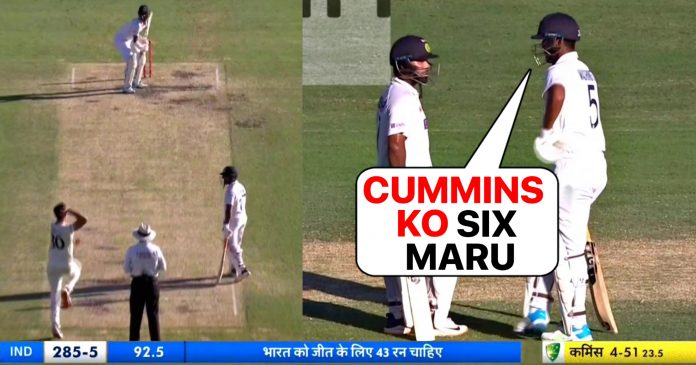 India has played some fearless cricket over the last couple of months which helped them win Border Gavaskar Trophy. Washington Sundar played brilliantly on his debut and was crucial with the bat in both the innings.

After India were outplayed by Australian bowlers in the first innings, Sundar and Shardul Thakur rescued India from a difficult position. The pair put on a 120 run partnership in the first innings. Sundar played patiently and saw India close the deficit to the minimal.

But his batting exploits did not end there. He came and played yet another brilliant innings in the record chase during the second innings. Sundar played good supporting role to Rishabh Pant in the chase.

But the most iconic moment in the chase came when Sundar told Rishabh Pant that he will take on Aussie pacer Pats Cummins. The young all rounder then took on Cummins and hit him for a brilliant six over backward square leg.

Cummins was Australia’s best bowler of the series. But Sundar got a good measure of Cummins on the final day. The brisk paced partnership between Rishabh Pant and Washington Sundar have paved way for India to clinch a historic win.

The pair managed to bring down the required run rate from over 6 in the final overs. Their slogging with few overs left kept India in the hunt until the climax. Once Sundar was dismissed, Pant made sure that India reached the target and breached Gabba fortress.

Washington Sundar was a pleasant surprise for the team management. The young finger spinner was brilliant with the bat in both the innings and was more than handy with the ball.

In the absence of Ashwin, Sundar played a huge role as a bowling all rounder. On the other hand, he had not played a first class game for three years before making his test debut in Brisbane.

After his great performance at Gabba, Sundar was included into the test squad for the first two games against England. He will be hoping to play more tests for India in the immediate future as Jadeja is still recovering from his thumb surgery.

Watch, Sanju Samson unbelievable flying catch. Leaves everyone in the stadium in shock