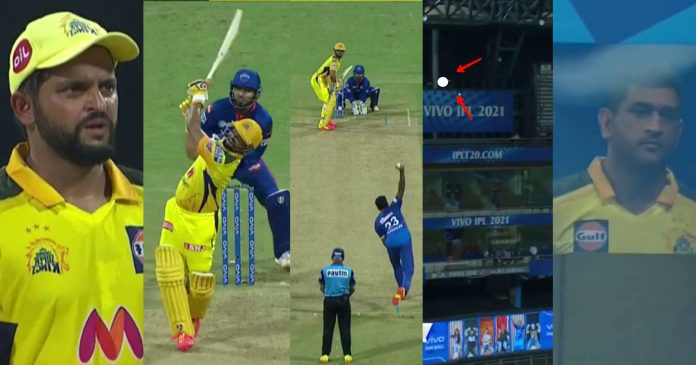 Chennai Super Kings are squaring off, against Delhi Capitals in the second game of the tournament. The teams are playing in Chinnaswami Stadium, Bangalore. All the teams this IPL will be playing on neutral grounds, owing to the COVID scare. Winning the toss, Delhi Capitals elected to field first. The decision, proved to be great one.

Both the openers got out, for cheap scores. Faf Du Plessis was the first to go, at the score of zero. He was caught in front, of the wicket by pacer, Avesh Khan. The other opener, Rituraj Gayakwad was dismissed by, Chris Woakes. He, nicked one to slips. The team total of Chennai, was just 7 runs. Hence, the bad memories from last year came, rushing back to Chennai Super Kings, where they kept losing wickets at the top.

However, one major difference between last year and this year was, the inclusion of Suresh Raina in the Chennai team. Both Dhoni and Raina are, the only players in the CSK team to have represented the franchise, in every season since the, inception of IPL. In the previous season of IPL, Suresh Raina had pulled out, of the IPL due to COVID-19 fear.

Suresh ” Chinna Thala” Raina is back!

His non exclusion had, severely dented CSK’s chances. This time around, Raina was more than determined to make up for, last year. Coming in at number 4, Raina’s first scoring shot was a four off, Chris Woakes. His, real urgency was shown when Raina carted, Ashwin for back to back fours in, the fifth over.

Amit Mishra was, the next target of Raina. Coming into bowl the 12th over, the first ball of this over was pumped by Raina for a huge six, over sightscreen. A double, followed and then the third ball was again, thumped for a six over mid wicket via a, powerful slog sweep. Consequently, seventeen runs came of the over.

Suresh Raina’s fifty came in, the very next over. He lined up Stoinis, for a typical Raina six. Making room to a pace less short delivery, the batter pulled the ball powerfully, for a flat six over midwicket. The south paw took, just 32 balls to complete his 50. Moreover, it included 3 fours and 4 sixes. After a gap of one year, it was a welcome return for Raina in IPL.

Watch the video of Raina’s innings: