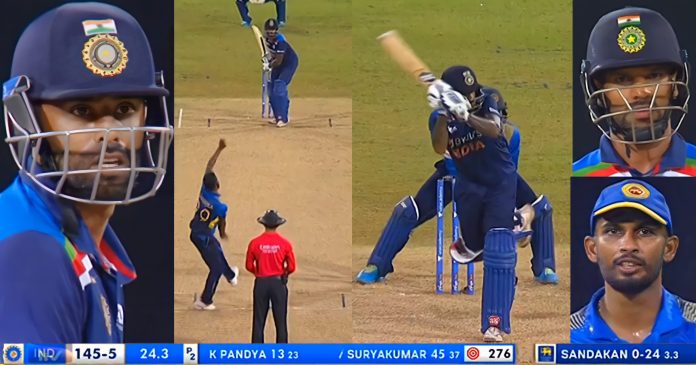 India are in trouble chasing a total of 276 runs in the second ODI. They have slipped to 170-6 in 29 overs. Prithvi Shaw was the first wicket to go for 13 runs. He was followed by Ishan Kishan who made just 1 run. Shikhar Dhawan too was dismissed when he was LBW of De Silva. Hence India were left at 65-3.

Surya Kumar Yadav made a well knit 53 runs but he was also gone as India went to 160-6. Coming into bat at number 5, Yadav started positively. His first four was when the bowler bowled on a length. Hence closer the batter hit a gorgeous chip shot over midwicket. The second boundary followed soon.

It was on a good length and bowled in at middle stump. Hence the batsman stood tall and carved with some attitude to the right of mid on. The next boundary was a lap shot over fine leg.

Another four came in the next over. It was a short ball outside off. The batter jumped up along with the ball. Consequently he managed to hit it as it goes past him and the ball went for a four. The next four came when Surya Kumar thrashed a shot to a delivery which was short and wide outside off.

He brought a his first fifty with a thumping drive against the turn. It was on a good length outside off and the batsman smashed it for a great four.

However Surya was dismissed soon. He was caught LBW to Lakshan Sandakan for a 53.