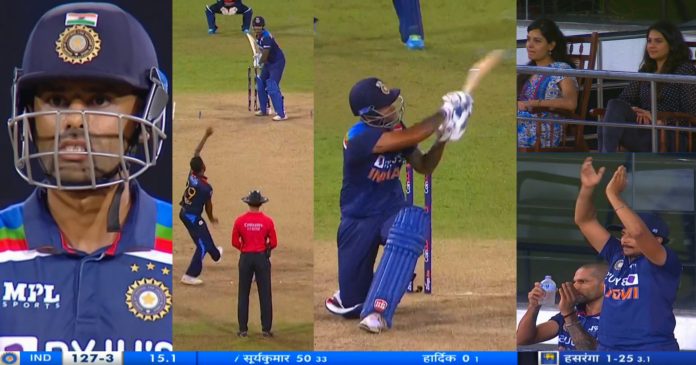 India and Sri Lanka are facing each other in the first T20 at R Premadasa stadium, Colombo. The hosts won the toss and elected to field first. He said that “the wicket will be better in the second half of the game”. Hence he would like to bowl first. The Indian captain Shikhar Dhawan held the similar view. He too told ” We would have bowled first as well, there’s dampness in the pitch”.

The decision to bowl first proved to be great for Sri Lanka. Prithvi Shaw the Indian opener who is making a debut in the T20 format was dismissed for a golden duck. It was Dushmantha Chameera who bowled a ripping out swinger to the batsman. Accordingly the batsman tried to drive it but could only edge it to the wicket keeper who easily took the catch.

On the first ball of the 7th over, Wanindu Hasaranga bowled a straight delivery. Samson played all around it and was caught plumb in front of the wicket. Moreover the umpire did not think twice before sending him on his way. Samson made 27 in 20 balls with 2 fours and a six.

Surya Kumar Yadav came to bat at number 4. He looked in fine touch from the ball go on a dry wicket. After hitting some beautiful shots for four, Yadav smashed his first six to C Karunaratne when he went down on knee and slogged the bowler over deep square leg. In the next over, he reached his fifty in style.

Wanidu Hasaranga bowled a flighted delivery and Surya Kumar came down the track and thumped him over his head for a mighty six. Hence he reached his 50 in just 33 balls. Moreover it was his 2nd fifty in T20 cricket. However he was dismissed on the very next ball.

The same bowler again delivered a flighted ball. Hence Yadav once again tried to carve the ball over covers but was beaten in the air and could only hit the ball in air. Moreover the fielder easily took the catch and Yadav was gone.