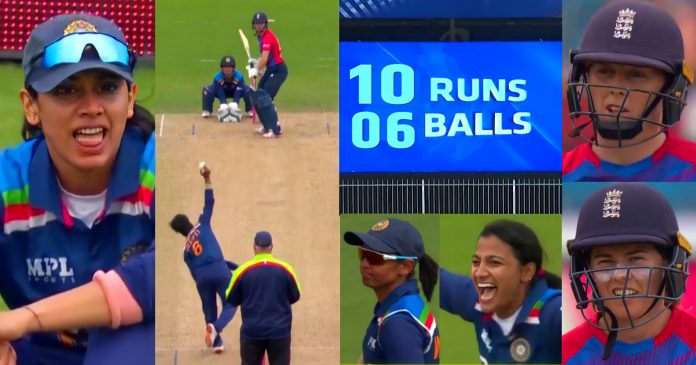 India women defeated England women in the pulsating second T20 to lock the 3 match series. Both teams are now tied at 1-1 going into the final T20 match. After a loss in the ODIs, India women will look to win the T20 series and return home with a victory in at least one format.

Batting first, India women made 148 runs for the loss of 4 wickets. Opener Shefali Verma made 48 runs in 38 balls. The skipper Harmanpreet Kaur chipped in with 31 runs with 25 balls that included 2 sixes. For England Mady Villiers gave 9 runs in 2 overs and took a wicket.

Chasing a target of 149, England had a poor start. They lost 2 wickets for just 31 runs. After that opener Beaumont and skipper Knight added 75 runs for the third wicket. The duo took England to a strong position. However as soon as the wicket fell, there was a collapse of home team batting order. They lost 6 wickets for 31 runs and a score of 106-2 became 137-8. Moreover the hosts could not recover from this and lost the match by 8 runs.

The match ended with a nerve wracking final over that resulted in an Indian victory. Coming into the last over of the match, England was placed at 135-7 and required 14 runs to win. Sophie Ecclestone and Mady Villiers were at the crease while Sneh Rana was the designated Indian bowler to defend the runs.

A thrilling final over!

On the first ball, Villiers came down and knocked it to mid wicket for a single. (13 runs to win from 5 balls)

The next ball was whipped towards long on by Ecclestone and she set off for a run. However her partner Villiers wanted to run a brace but Ecclestone wasn’t interested at all. Hence Villiers had to rush back but by then it was too late. The fielder at long on threw the ball to the keeper’s end who broke the stumps in no time. Consequently Villiers was run out by the barest of margins.

Third ball of the over was just a leg bye as pressure mounted on England. The following ball was even better as Ecclestone tried to smash it over bowlers head but was brilliantly intercepted by Rana. She could not catch the ball but it was a dot nevertheless.

The last two balls were just 2 singles as Rana kept her nerves and won the match for India.

Watch the last over here: